Top 10 Weirdest Trophies You May Not Know 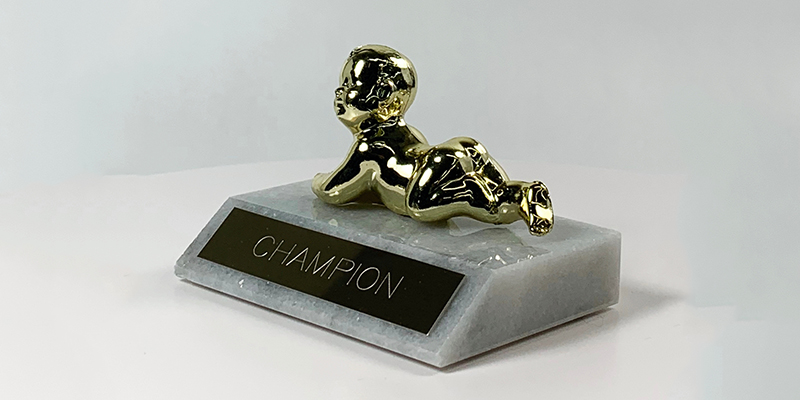 Top 10 Weirdest Trophies You May Not Know

Do you need an award for the tiniest blunder? Are you the person in your class that farts the most? Is it causing everyone in the class to tuck their noses with their hands? Then this is the reward for you. It may also be a lovely trophy used to playfully warn someone that their team stinks like a skunk, but in a wonderful fashion and style. This horse’s posterior bobble head trophy is great for the last place prize and adds fun to any awards presentation. The back bobble head of the horse is always 5.5 inches tall. As a manner of displaying a sense of humour, pushing one to work hard, and making the game exciting and engaging, it may also be given to the ‘buddy’ with the biggest record of losses. Do you have a pal that spends the majority of her time in the bathroom? Maybe the man with the cleanest toilet among your buddies. Well, it’s about time you gave them this magnificent award. It can also be used to award any loser, coupled with a ‘potty humour trophy.’

BBQ tournaments are the ideal fit for this prize. Over 100 elite American teams from California, Oregon, Utah, Nevada, and Arizona will fight for a prize pool of USD 30,000. It offers a variety of specialties, including chicken wings, beef ribs, brisket, and an unique dessert category. Simply said, it’s an eating contest. For their amusing gluttonous character, the champions receive a pig trophy. Football video games are enjoyable to play. Creating fantasy leagues and participating in them in order to demonstrate their knowledge of the game. If you’ve played FIFA 2017, you’ll understand. Any competition, though, isn’t complete without a prize for the winner. Shockingly! The losers are given this trophy. They’re taunted with this trophy, and it’s hilarious to see the loser accept it bravely and with a smile! Do you have a buddy that drinks a lot of beer? Is your friend the kind to spend your whole year’s money on a weekend of drinking? Well, this amusing prize is given to the season’s largest drinker. After breaking the school record of 1000 beer cans in a month, my college companion received the prize! Isn’t it crazy? Do you know anyone who can smell a sale a mile away? A smiling bobble head adorns this briefcase-toting sales shark. Any in-office joke award is made funnier with this trophy. It’s a cute award for recognising one’s favourite sales shark’s efforts. Gifts abound for newborns, but what about awards? This trophy is characterised as a “beautiful treasure” and “a one-of-a-kind present” that you can proudly display in your business, home, or child’s room. It honours the special occasion of a child’s birth, baptism, or christening. It may also be used to commemorate an 18th birthday, a 21st birthday, or any other event! This is the ideal reward for the highest-scoring person or team. The female golf duffer trophy, on the other hand, is a humorous trophy depicting a disgruntled female golfing figure preparing to mutilate an already deformed golf club on the ground. The amusing prize is given to the tournament’ loser’ or clown, and it is sure to brighten the mood. This is the ideal trophy for rewarding the golf dunderhead in your party. Those pals you bring to the golf course who start carrying the incorrect clubs, use the wrong ball for their game, and like teeing up the ball in front of the tee box and dropping a lost or unplayable ball from the rough. Reward them as well!