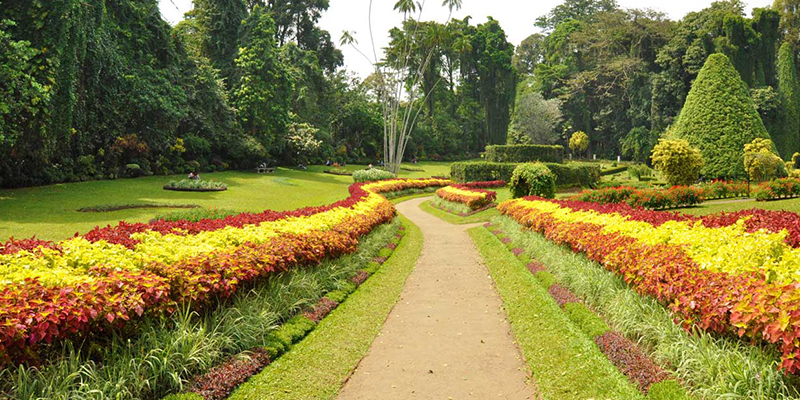 One of the most striking natural landmarks in Sri Lanka is Adam’s peak, which is also known as Sri Pada. And one of the most celebrated pilgrimage spots, as well. It is situated at an altitude of about 2244 m in a lovely part of the southern hill country. As Buddhists say, it is believed that the rock formation at the summit is either the footprint of Lord Buddha’s. Or, according to Muslims and Christians, it is Adams. While reaching the summit by foot takes about 4 hours, devotees of many faiths ascend the mountain daily to invoke blessings.

9 Temple of the Tooth – A unique Buddhist Temple.

Another major holy site in Sri Lanka that has the Tooth Relic of the Lord Buddha is this shrine. Due to its beauty, it is what attracts both locals and foreigners. Basically, the temple is both sacred and geographical, and is situated in Kandy. The Temple of the Tooth is truly a heaven for art and history lovers. The interior of the temple is covered with paintings that are stunningly detailed and intricate. The brick wall that runs around the channel and Lake Bogambara is known as the wall of water waves. Above the moat and at the foot of these steps lies the main entry gate; there is a moonstone carved in the Kandyan architectural style. A rich array of architectural wonders is included in the vast complex: Colossal Dagabas (Brick Stupas), ancient ponds and demolished temples. Constructed during the thousand years of rule over Sri Lanka by Anuradhapura. It is one of Sri Lanka ‘s oldest capitals, which makes it no wonder that it has received the status of a UNESCO World Heritage Site. With wonderful things to do and see, Anuradhapura is bursting. One of the holy sites in Anuradhapura, starting with Mihinthale, is a holy peak. The tree of Bodhi, which is a special thing here. In reality, it is the tree that Lord Buddha attained his illumination, hence the tree of enlightenment. If you are in search of spirituality in Sri Lanka, then you should certainly visit this place.

If in Sri Lanka you are spiritual and at the same time interested in culture, history, then no other place is better. It is located in Sri Lanka’s North Central Province. Polonnaruwa has many monuments and heritage that reflect its history and culture, and with hundreds of ancient buildings such as temples and tombs, they are well preserved and also full of archaeological features. Ancient Polonnaruwa City has been designated a UNESCO World Heritage Site and is the second most ancient kingdom in Sri Lanka. Today, the ancient town of Polonnaruwa remains one of the country’s best-planned historical remnant settlements, proving the order and grandeur of the first rulers of the kingdom. The ancient rock fortress of Sigiriya or Sinhagiri is situated in the northern Matale district near the town of Dambulla in the central province of Sri Lanka. The name refers to a position of historical and archaeological interest occupied by a large rock column almost 200 metres long. Sigiriya is situated in Sri Lanka ‘s northern Matale district, known as the Lion’s Rock. It’s a UNESCO World Heritage Site and one of the country ‘s finest architectural sites. The monument here is ultimately a majestic fortress constructed with remarkable paintings and water gardens that make anyone unquestionably fall in love with the place. Most of the western face of the frock and about 500 ladies in the portraits have been obscured by the portraits. In the paintings, the ladies portrayed were known as Apsaras. By now, though, several paintings have been destroyed. The water gardens are regarded to be the world’s oldest landscaped gardens. The park is a protected area with an elevation of 2100 m in the central highlands of Sri Lanka near Nuwara Eliya. This spot is all about people who enjoy hiking and enjoying living in nature. This highland is rich in biodiversity and the area is native to several species found here. As the rich biodiversity is still extensively studied, Horton plains is not only a location for nature lovers but also for those involved in educational and scientific activities. The main draw of the plains of Horton is the end of the planet at the southern edge of the park. Ella is certainly one of Sri Lanka’s most scenic hill-country villages to visit. In this small town surrounded by gorgeous tea greens, there are a lot of places to visit. One thing to do is walk up Little Adam’s peak. It is the nephew of the peak of Adam and it takes just 45 minutes to walk from Ella to the mountain while enjoying nearby villages and tea plantations. Rolling along the rails on the Nine Arch Bridge in Ella is one of the things you must do in Sri Lanka! It is a world-famous bridge concealed between lush green tea fields, with stunning architecture. Endless tea field views are also a mesmerising experience at Lipton ‘s seat in Haputale. In comparison to other national parks in Sri Lanka, Yala, located in the southeast part of Sri Lanka, is considered one of the most common wildlife parks because of the presence of a wide variety of species. In Yala, the wildlife is very rich. This involves elephant herds, crocodiles, deer, chimpanzees, buffaloes, birds, sloth bears and leopards in particular. The best national park is Yala. It is one of the best leopard viewing sites in the world, with about 40-50 leopards. In addition, Yala offers the ideal habitat for the wealth of varied biodiversity there, with areas of thorny scrub land, brackish lagoons and rock monoliths. The Dutch Reformed Church, All Saints Church, Amangalla Hotel (formerly the New Oriental Hotel), the lighthouse and the bell tower are the other buildings in Fort that are of special architectural importance. Inside the Fort, the Dutch also built what was then an advanced tide-based sewage scheme. Galle Fort is a UNESCO World Heritage Site, also known as The Dutch Fort, which is the largest surviving fortress founded by European occupiers in Asia. In the extreme southwestern corner of the island, on the southwestern coast of Sri Lanka, is the fort of Galle. It is a historical landmark with architectural beauty that managed to preserve its prominence that tradition amid improvements made over the years. Located in Peradeniya, near Kandy, Sri Lanka, the garden is considered to be the largest and most spectacular botanical gardens in Sri Lanka. With more than 4000 species of plants, including orchids, herbs, medicinal plants and palm trees, it is also the oldest formal garden in the world. In addition, the garden also consists of a few historically prominent plants, such as the huge Ceylon Ironwood tree (1894), a Chinese tea plant (1824) and a camphor tree (1972) planted by well-known ancient rulers from various nations.