Top 10 Netball Players in the World 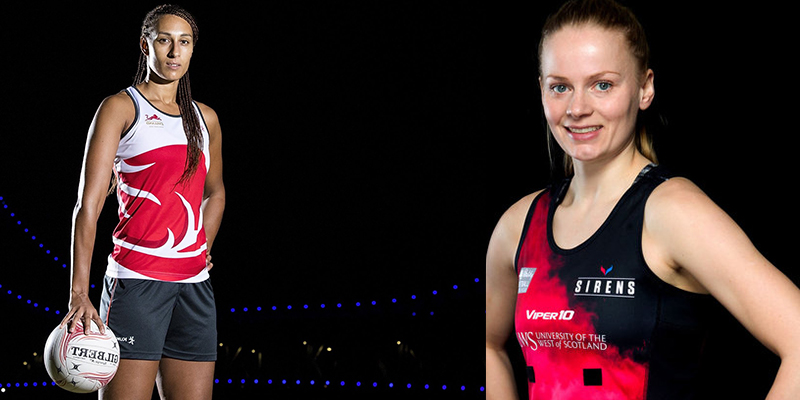 Top 10 Netball Players in the World

Shadine van der Merwe is a Netball player from South Africa. She was part of the South African squad which finished fifth at the Commonwealth Games in 2018. Posted by the Surrey Storm in the UK Superleague in 2018, van der Merwe was also picked for the 2018 Commonwealth Games and 2019 Netball World Cup in South Africa’s National Senior Team. She was signed in the Australian Super Netball League by Adelaide Thunderbirds in May 2019, having been chosen by the team as a replacement player for the long-term injured Beth Cobden. Claire Maxwell, also known as Claire Brownie, is an international Scottish netball player. She captained Scotland at both the Commonwealth Games in 2018 and the Netball World Cup in 2019. She also represented Scotland at the Commonwealth Games in 2014 and Netball World Cup in 2015. At club level she has played in the Netball Superleague for Glasgow Wildcats, Team Bath and Sirens, and in the British Fast5 Netball All-Stars Championship for Team Northumbria and Loughborough Lightning. Laura Robyn Langman ONZM is an international netball player from New Zealand, who plays in the Australian Super Netball league for the Sunshine Coast Lightning. Langman is mainly a midcourt player, the current captain of New Zealand’s national netball team (nicknamed the Silver Ferns), having once been the vice-captain of the national team in the past. She has been the most-capped player for the Silver Ferns since October 2018, having outpaced Irene van Dyk ‘s record of 145 national team matches.

Langman made her international test debut against England in 2005. She captained the New Zealand U21 team that year to win gold in Fort Lauderdale , Florida, at the World Youth Netball Championships. In 2005 and 2006, Langman won two Premiereships with the Magic in the National Bank Cup. She has also been selected for the Silver Ferns team that won a gold medal at the 2006 Melbourne Commonwealth Games.

Langman made her international test debut against England in 2005. She captained the New Zealand U21 team that year to win gold in Fort Lauderdale , Florida, at the World Youth Netball Championships. In 2005 and 2006, Langman won two Premiereships with the Magic in the National Bank Cup. She has also been selected for the Silver Ferns team that won a gold medal at the 2006 Melbourne Commonwealth Games. Joyce Mvula is a Netball player from Malawia. She has been selected to represent the Malawi netball team at the 2019 World Cup in Netball. She plays with the Manchester Thunder in the Netball Superleague. Now hoping to attend her third Netball World Cup, the Manchester Thunder forward will be key to her side ‘s goals of advancing past group stages in New Zealand’s stead. Her high shooting accuracy coupled with outstanding split-steps and excellent partnerships with Kathryn Turner and her mid-court attackers can make her a nightmare to deal with as defenders. Geva Kate Mentor, CBE is a netball player for the English International. In 2000, Mentor was selected for the England National Team, who debuted against New Zealand at the age of 16 the following year. She currently plays in the Australian Super Netball League for the Collingwood Magpies and before that was a two-time Sunshine Coast Lightning Premiership Captain. Pretorius had played in the Netball Superleaguealongside fellow Protea teammate Lenize Potgieter for the UK based Team Bath before joining the Sunshine Coast Lightning. Pretorius currently plays in the Australian Super Netball League for Sunshine Coast Lightning and has won back-to – back club premierships. She received the MVP award in 2017 for her performance at the Grand Final. She then shared the Player of the Year award for her performance in the 2018 season with Teammate Stephanie Wood. A former West Coast Fever ANZ Championship player, Bassett played throughout her career at the West Australian club from 2005 to 2016, before joining expansion side Sunshine Coast Lightning in the Suncorp Super Netball League at the start of the 2017 season. Caitlin first started playing at the Netball Association of Southern Districts in Perth. Previously Bassett played in the Commonwealth Bank Trophy for the Perth Orioles from 2005–07. In 2008 she played as a member of the Australian Diamonds team for one half of a game. In 2011 Bassett was part of the victorious Australian Diamonds Team 2011 World Championship, competing in the final against New Zealand.

Bassett joined Sunshine Coast Lightning expansion club in 2017 as part of the new Super Netball competition. With an MVP performance in the Grand Final, she was a critical attacking player on an immensely successful side, winning consecutive premierships and capping off the 2018 premiership. Basset then joined Giants Netball, based in Sydney, on a three-year deal starting in 2019, a move that the club described as a major coup. Shamera Sterling is a Netball player from Jamaica. She was part of the Jamaican team, which won bronze at the Commonwealth Games in 2018. She was signed into the Netball Superleague by Loughborough Lightning earlier that year. She moved on to the Adelaide Thunderbirds in the Australian Super Netball League in the 2019 season after a short spell at Loughborough. Bueta made the move from Basketball to Netball in March 2012, registering as a target attack, goal shooter and wing attack.

In 2013, she was used as a substitute player for the injured Chelsea Pitman for the Queensland Firebirds. Later that year, for the 2013 World Youth Netball Championship in Glasgow , Scotland, where Australia placed second, she was picked for the Australian under 21 netball team and revealed that she was joining the NSW Swifts.