Top 10 Natural Arches in the World 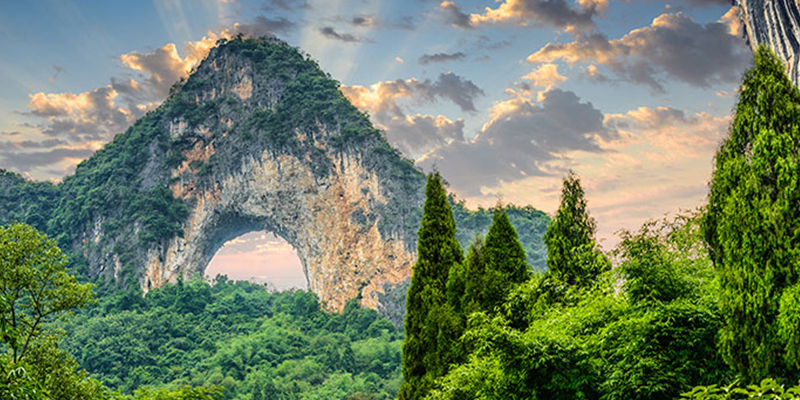 Top 10 Natural Arches in the World

Utah has not only one natural arch, but a whole National Park spread over 76,679 acres, with over 2,000 arches of natural scenery. It was established in 1929 and has seen many visitors since then, driving and walking through the arches. In the park, the most popular attraction is the Delicate Arch. Kolob Arch, Double Arch, Landscape Arch, etc. are other prominent arches, often carved due to erosion. The coast of the Algarve is a spectacle for Southern Portugal. Praia da Marinha, between Carvoeiro and Albufeira, is one of the most popular places here. The double arch called the Spectacle Arches, off the beach, formed when waves eroded the coastal sedimentary rock, amnily sandstone, is the most visited landmark here. In Lagoa, you will enjoy the best view by taking a boat ride along the coast. Located near the town of Vallon-Pont-d’Arc in Southern France, the Pont d’Arc is one of the world’s most spectacular natural arches. It is carved by the Ardèche River, and the arch is very popular with visitors along with the river portion, not just because it forms a natural gateway to the Ardèche Canyon, but also because it is a popular location for canoeing and kayaking. At the southern tip of Cabo San Lucas, which is the very southern end of Mexico’s Baja California Peninsula, the arch of Cabo San Lucas is a distinctive rock formation. The arch is locally referred to as “El Arco,” which in Spanish means “the arch,” or “Land’s Edge.” It is often referred to as Land ‘s End as it is positioned such that if a line were to be drawn, the South Pole and the arch would be collinear. From Cabo, this golden sea arch is seen. This is where the Pacific Ocean joins the Sea of Cortez. On the coast of Chile, 18 km north of Antofagasta, La Portada is a natural arch. It is one of fifteen natural monuments that are part of Chile’s protected areas. In the spa town of Pucatrihue, Osorno Province, there is another identical but smaller structure. “The Gateway” is situated in the Pacific Ocean, in the area of Antofagasta, not too far from the coast, and is a popular location for travellers and photographers alike. It is one of the country’s endangered natural monuments, consisting of Andesite stone, sedimentary rock, sandstone and fossils. On the Jurassic Coast near Lulworth in Dorset, England, Durdle Door is a natural limestone arch. It is owned by the Welds, a family who, on behalf of the Lulworth Properties, owns 12,000 acres in Dorset. It is open to the public. The Durdle Door is an arch situated in a private domain, projected from Dorset’s Jurassic Coast in England, and is connected to the mainland by an isthmus of 390 feet. The natural limestone arch is accessible by foot and is open to the public. Hikers always want to do so instead, considering the steep track with steps from Lulworth Cove. A common photographic location is the 140 million-year – old bridge. Located on Gozo Island, which is part of Malta, the Azure Window is a limestone arch. As a result of sea erosion, it was formed by the collapse of two caves of limestone. Currently, right now, pieces of the rock are sliding from under the arch. Experts agree that this arch ‘s state is such that it is expected to crumble within a few years at any moment. However, actually, visitors prefer to dive through it.

A few kilometres outside Yangshuo in southern China’s Guangxi autonomous zone, Moon Hill is a hill with a natural arch across it. A part of the Guilin Mountains is Moon Hill. It is named after a large, semicircular hole in the hill, all that remains of what was once created in the phreatic zone by a limestone cave. After 20 minutes of climbing, travellers can reach it and then walk through the bridge. Some even choose to take a longer stroll by ascending all the way to the top of the arch, from which an amazing view of the environment can be enjoyed. The Arch of Shipton is named after Eric Shipton, the English mountaineer who first discovered it in 1947. It is also referred to as Tushuk Tash, which means Void in the Sky. It is situated in China, northwest of Kashgar in the province of Xinjiang, and was only known to locals. This rocky arch, perched on a mound of debris, is the tallest natural arch, at a staggering height of 1,200 feet, and has a span of 212 feet.

At a length of 250 metres, the Aloba Arch in Central Africa’s landlocked country of Chad is the world’s longest natural arch. It is the second tallest in the world as well. Thanks to its remote position, it is one of the most unfrequented ones. It seems to have two steps. The lower part of harder stone was eroded by stream, while the upper portion is like a buttress at the end of a sandstone slab.