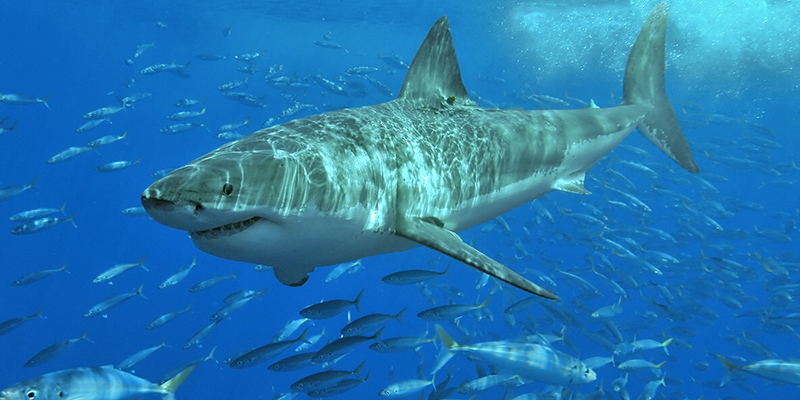 If you believe terrestrial snakes are the only ones who can kill you, think again. Sea snakes have venom that is exceedingly toxic to humans. However, injecting the venom while biting the victim is exceedingly unusual; if they do, the consequences can be disastrous. They only inject a little quantity of venom when they bite, so the victim does not feel the symptoms right away. Within an hour, symptoms such as headache, a thick tongue, and vomiting appear, followed by an elapid attack and gradual muscular paralysis. The underwater devil is fast, ferocious, and capable do enormous harm, a terrifying combination. Barracuda have a long snake-like body with sharp edged fang-like teeth that resemble piranha teeth in appearance and function. They may grow to be as tall as 7 feet and are noted for being fast swimmers that can overtake their prey at a speed of roughly 27 mph. They balance their weight before biting down on their prey with strong teeth that can damage nerves and blood vessels. They don’t come into contact with people very often, but when they do, it may be a bloodbath. They are capable of tearing chunks out of people’ bodies. Moray eels are generally found in deep oceanic or blackish water, and they are timid creatures who shun contact with people whenever possible. They can, however, guarantee that they aren’t the one you can play with if they are sufficiently intimidated. Because they contain a plethora of microorganisms in their mouth, a moray eel bite can readily result in infected wounds. Because of their weak vision, moray eels rely significantly on their excellent sense of smell. Several divers have lost fingers while attempting to feed themselves by hand. This little fish has an odd appearance, resembling a rock, which allows it to hide from predators in the area. Those who tread on the fish unintentionally will be confronted with sharp spines that may easily puncture bare feet. The majority of stonefish stings occur as a result of treading on them, with stinging when picked up being less prevalent. Stonefish stings can happen on the beach as well as in the sea, as they can stay out of the water for up to 24 hours. When a person is stung, they not only experience pain from the wound, but they also receive a small amount of neurotoxic, which may shut down their breathing system and even cause their heart to stop beating. It may appear to be a docile creature, but don’t underestimate it. The stingray is usually calm, yet its spiky tail can cause catastrophic harm. The tip of the tail is capable of cutting arteries, and it is coated with venom that is especially dangerous to mammals. Stringer bites induce local damage, pain, edoema, and muscular spasms from the venom, which can lead to infection from bacteria and fungi later. Unless the stinger pierces a key location, the damage is exceedingly painful but not often life threatening. This big shark, sometimes known as the sea tiger, has the broadest feeding range of any shark, eating anything from fish to seals, birds, squids, turtles, dolphins, and even smaller sharks. The bull shark is intimidating, but the tiger shark is totally different. They don’t look for humans to eat, although they do frequent shallow reefs, ports, and canals, where they may come into contact with humans. Although shark bites on people are exceedingly rare, tiger sharks are responsible for a huge majority of foetal shark attacks, making them one of the most hazardous animals living beneath the sea. The tremendous in their name is more of a gloomy testament to their fury than a declaration of enthusiasm. The great white shark’s greatest distinguishing feature is its size, which may reach 20 feet in length and weigh over 7000 pounds (3324 kg). They also have a distinct tendency of striking their victim from underneath, with their mouth wide open, allowing their razor-sharp teeth to do as much damage as possible. Anyone who has watched the movie Jaws knows how dangerous this creature is to people. The great white shark is responsible for the majority of unprovoked foetal shark attacks on humans that have been documented. Despite its diminutive size, it packs enough venom to kill 26 adult males in minutes, giving it such a charming name for a dangerous beast. Because their bites are so little and painless, many victims are unaware they’ve been bitten until respiratory depression and paralysis set in. If not treated, the venom can cause nausea, respiratory arrest, heart failure, severe and possibly complete paralysis, and death. Because anti-venom for blue ringed octopuses has yet to be discovered, they are one of the most deadly creatures for humans. When it comes to water threats, size doesn’t matter, which is why we have box jellyfish, which has one of the most lethal venoms on the world. Those who come into contact with the poisonous tentacles of a jellyfish are said to experience excruciating agony and a burning sensation that can be fatal to humans. But the thing that makes it the most deadly is that, because of its virtually translucent appearance, people are unable to identify it before it does injury.