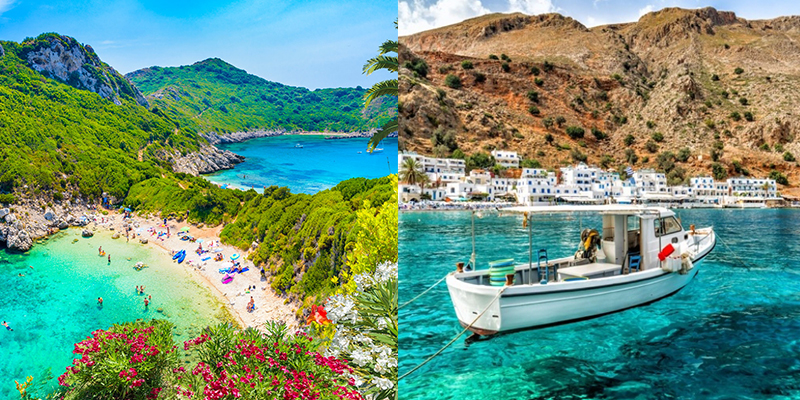 Symi is a Greek island which is part of the Dodecanese group of islands. It is renowned for its beaches, an annual music festival and Symi Town harbor, surrounded by colorful neoclassical homes. The 18th-century Archangel Michael Panormitis Monastery on the southwest coast is a major Greek Orthodox pilgrimage site with a Byzantine museum. Elafonisos is a small Greek island between the Cythira and the Peloponnese. It lies between the Cape Malea and Vatika coasts. The island is 19 square kilometers (7 square miles) in area. During the winter the population varies between 300 and 350 but rises significantly in the summer months. The number of tourist tourists hits more than 3,000 a day between July and August (carrying around 1,600 cars with them). The island is known by many for its brightly colored, sandy beaches. Sarakiniko, Fragos (Simos) and Panagias Nissia are among the most well known of its beaches, all filled with blue-green waters. Lefkada is a Greek island in the Ionian Sea which is linked by a carway to the mainland. Beaches along the West Coast such as Porto Katsiki and Egremni feature sheer cliffs and turquoise waters. The eastern coast is renowned for their traditional settlements, including Nydri’s seaside resort. In the north, the town of Lefkada is the center and capital of the island. In the south Vassiliki attracts windsurfers. Corfu, an island in the Ionian Sea off the northwest coast of Greece, is characterized by rugged mountains and a resort-studded shoreline. The cultural heritage is a result of years spent under Venetian, French and British rule until uniting with Greece in 1864. Corfu City, flanked by 2 formidable Venetian fortifications, features winding medieval streets, a French-style arcade and St. Michael’s and St. George ‘s grand palaces. Mykonos is an island in the Aegean Sea with the Cyclades group. This is popularly known for the atmosphere at a summer party. Beaches like Paradise and Super Paradise have bars where thumping music blares. Massive dance clubs host world-renowned DJs, and normally remain open until midnight. Iconic landmarks include a row of windmills from the 16th century which sit on a hill above the town of Mykonos. Kefalonia is an island in the Ionian Sea to the west of the Greek mainland. This is characterized by rough desert deserts and sandy coves. Its capital, Argostoli, stands on a hillside overlooking a small harbor. The indented coastline of Kefalonia is composed of calcareous cliffs, bays and small white sand beaches, such as Myrtos Beach in the north. Many beaches are accessible only on foot or via narrow, winding paths. Rhodes is the largest of Greece’s Dodecanese islands, and is also the traditional capital of the island group. Administratively the island forms a separate municipality within the regional unit of Rhodes which is part of the administrative area of the South Aegean. The island’s main town, and municipal seat, is Rhodes. In 2011 Rhodes city had 50,636 inhabitants. It lies northeast of Crete, south-east of Athens. Rhodes’ nickname is The Knights Island, named after the Knights of Saint John of Jerusalem who ruled the island between 1310 and 1522. Zákynthos, also known as Zante, is a town of the same name on the Ionian island, off the western coast of Greece. Centuries of Venetian rule are attested by a ruined castle above the town. The Byzantine Museum sits on central Solomos Square, with its arcade of arches. The religious art exhibits contain frescoes and icons. The belfry of the Church of Agios Markos in the 16th century was modeled on that of the Basilica of St. Mark in Venice. Crete, the largest island in Greece, is known for its diverse scenery, ranging from fine-sand beaches at Elafonisi to the White Mountains. According to Greek mythology, Mt. Ida, the highest of the range, is home to the Ideon Cave which was Zeus’ birthplace. The capital, Heraklion, houses the renowned Heraklion Archeological Museum, which houses Minoan artifacts, and the Bronze Age settlement, Knossos. Santorini is one of the Aegean Sea islands of the Cyclades. It was destroyed in the 16th century BC by a volcanic eruption that transformed its rugged landscape for ever. The whitewashed, cubi-shaped houses of its two main cities, Fira and Oia, cling to cliffs over a crater. We overlook the sea, tiny islands to the west and beaches composed of black, red and white pebbles of lava.