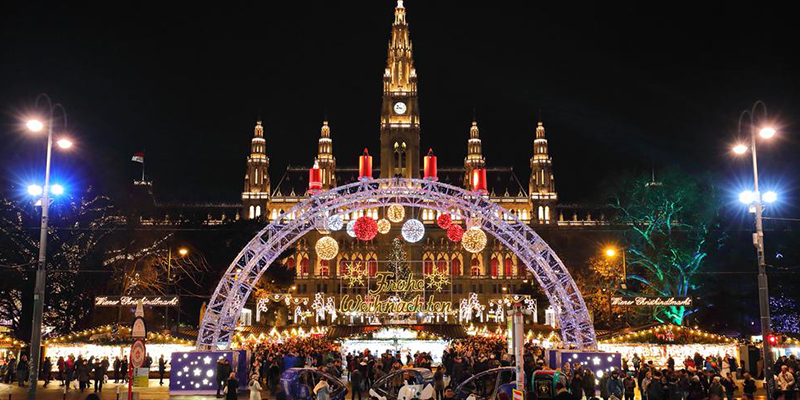 Despite the fact that Zagreb’s Christmas market is just in its seventh year, it has already established itself as a popular destination for winter visitors. It even received the title of “Best Christmas Market” in 2015, according to a survey of over 100,000 passengers conducted on the European Best Destinations website. While it may not be as large or spectacular as some of Europe’s other long-standing Christmas markets, the Advent festival in Zagreb provides a genuinely distinct Christmas ambiance. A typical Austrian Christmas is available at Mozart’s birthplace. The beautiful Cathedral Square, where all the holiday activity takes place, offers a variety of traditional booths offering everything from handmade crafts and souvenirs to typical Austrian holiday meals, cookies, wine, and punch, despite its small size. Bavaria’s capital has a lot more to offer than Oktoberfest. In December, Munich comes alive again, with over ten huge Christmas markets springing up all around the city. The Christmas market on Marienplatz is the largest and most commercial, with hundreds of stalls and a massive Christmas tree. Each market has its own own personality, so visitors will never get tired while browsing the numerous stalls, which provide anything from wonderfully created gifts and souvenirs to delectable meals and beverages. Frankfurt’s Christmas market is not only one of Germany’s largest, but also one of its oldest, going back to 1393. What makes it genuinely distinctive, though, is the city’s atmosphere. While many European towns have a rich history and a plethora of beautifully maintained ancient structures, Frankfurt’s town squares are so lovely in and of themselves that part of the holiday mood is certain to rub off on every visitor. Copenhagen is one of those European towns where the Christmas spirit seems to be abundant whether or not you are celebrating the holidays. There are seven big Christmas markets to attend if you genuinely want to immerse yourself in the city’s wonderful ambiance, with the market in Tivoli Gardens being the most popular. Christmas in London is definitely a once-in-a-lifetime event, and each winter holiday enthusiast should pay the city a visit in December at least once in their lives. And for those who don’t enjoy the most lovely season of the year, a visit to London will quickly alter their thoughts. With so many markets to choose from, the season may seem too short to cover everything. The absolutely must-see markets for visitors visiting London’s winter wonderland for the first time are Winter Wonderland’s market in Hyde Park, Southbank Centre’s Winter Market, and London Bridge City’s riverfront market. Brussels’ Christmas market is noted for being distinct from its European rivals. The 240 wooden Christmas chalets, which resemble fairytale gingerbread houses and sell a range of Christmas products, decorations, presents, and seasonal cuisine, are one of the primary attractions. In Brussels, there are numerous markets, although the majority are clustered around Place Sainte Catherine and are within walking distance of one another. Strasbourg is regarded as the “Capital of Christmas” because its Christkindelsmärik is the oldest in France and one of the largest in Europe. It now spans 12 venues across the city centre, with over 300 vendors selling French foods, crafts, and decorations. Christmas in the Czech Republic is an unforgettable event, and the Christmas markets in Prague are the epicentre of the festivities. There are many smaller markets throughout the city, as well as two bigger markets in the city centre, both about a 5-minute walk apart — at Old Town Square and Wenceslas Square. The Vienna Christmas market is one of the most well-known marketplaces in the world, as it transforms Vienna’s already lovely streets into a genuine winter paradise every year. The classic “Vienna Magic of Advent” market, located in front of City Hall Square, is one of the most well-known. If you only have time to see one Christmas market in Europe, this is the one to go to.