Top 10 Most Amazing Railway Stations in the World 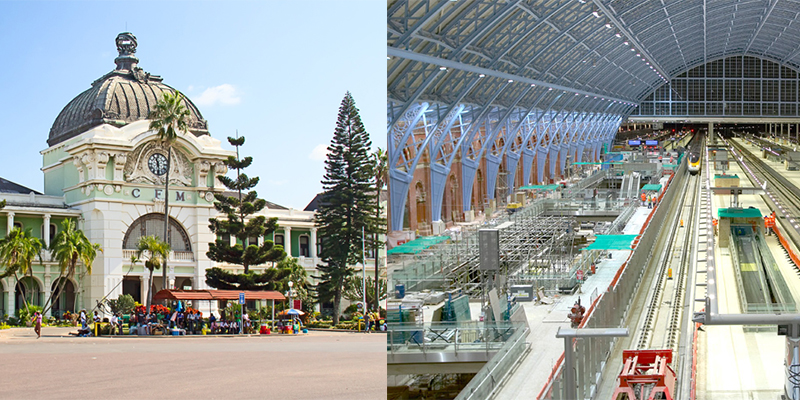 Top 10 Most Amazing Railway Stations in the World

The railway station Kuala Lumpur is a train station in Kuala Lumpur, in Malaysia. Built in 1910 to replace an older station on the same site, the station was the town’s Kuala Lumpur railway hub for the Federated Malay States Railways and its successor Keretapi Tanah Melayu until Kuala Lumpur Sentral assumed most of its function in 2001. The station ‘s architecture is noteworthy, embracing a combination of Eastern and Western styles.

The station lies along a road named Jalan Sultan Hishamuddin, previously known as Victory Lane, which was part of Damansara Road in turn. The station is near to the similarly built Railway Administration Building, and the National Mosque and Dayabumi Complex. Pasar Seni Station is situated across the Klang River, 400 meters downstream. It was with the 1898 station upgrade, that Kanazawa station caught the attention of architects all over the world. Although it raised some eyebrows when it opened because its rather modern architecture did not fit the old castle town, Japan’s Kanzawa station is one of the world’s largest railway stations. Renovated in 2005, the gigantic ‘drum gate,’ whose legs resemble tsuzumi drums and the massive dome, is particularly noted for this.

Central Railway Station in Maputo, Mozambique is a historic train station. It is run by Mozambique Ports and Railways on the CFM Sul line, which connects with South Africa, Swaziland and Zimbabwe. It was designed in the Beaux-Arts style, from 1908 to 1916. The station has been widely recognized for its attractiveness and has been ranked as one of the most beautiful in the world by international publications. In addition to serving as an active train terminus, the station includes a rail museum, food venues, and music events.

The only African railway station in this list, the CFM station in Mozambique’s capital city is highly inspired by the Portuguese architecture. It was completed in 1916, by Alfredo Augusto Lisboa de Lima, Mário Veiga, and Ferreira da Costa. The station has a view of the popular Workers’ Square. The CFM station features a collection of steam locomotives. This station was designed by the architect August Jasmund and opened in 1890. This Turkish station is situated near the Bosporus Strait and is designed in a blend of Art Nouveau and Oriental architecture. Especially noteworthy are the station’s stained glass windows and clock towers which once was the terminus for the famous Orient Express connecting Paris to Istanbul.

The Ottoman authorities concluded after the Crimean War that a railroad connecting Europe to Istanbul was required. The first contract was concluded in January 1857 with Labro, a British member of parliament. Three months later the contract was terminated because Labro was unable to provide the capital needed for the project. Similar second and third contracts which were signed in 1860 and 1868 with British and Belgian entrepreneurs ended with the same result.

The Gare du Nord, officially Paris-Nord, is one of six major SNCF mainline network terminus stations for Paris , France. It serves train services along the Paris – Lille railway to regions north of Paris. The Gare du Nord is situated near Gare de l’Est in the 10th district and provides links to many public transit lines including Paris Métro, RER and buses. Total passenger figures make it the busiest railway station in Europe by the number of passengers, around 222 million a year.

The Gare du Nord, opened in 1864, is an architecturally brilliant achievement. The decorations which adorn it complement its neoclassical design. These include the facade ‘s 23 female statues representing the destinations served by the railway line. Between 1895 and 1905 the first terminal station building was built as a replacement for the first Brussels-Mechelen-Antwerp railway terminus. The stone-clad building was designed by Louis Delacenserie, with a large dome over the waiting room hall. A notable building , designed by local architect Jan Van Asperen, is also the viaduct into the station. A plaque on the north wall bears the word Middenstatie, now an antiquated term in Dutch.

It is a blend of Architectural styles, designed primarily by Louis Delacenserie. The huge dome over the waiting hall is Delacenserie ‘s brain-child, the trainshed was designed by Clement van Bogaert and architect Jan Van Asperen designed the glass viaduct into the station. In several surveys this Belgian structure was selected as the most beautiful railway station. This station, opened in 1851, takes its name from a nearby church dedicated to Our Lady of Atocha. It was designed by Elissagne and Gustave Eiffel and Alberto de Palacio. What makes the Atocha station special is the large garden developed around it, almost like a small jungle. Spanish architect Rafael Moneo designed it and houses hundreds of plant species and rare animals. There is also a memorial for Madrid bombing victims of 2004. St Pancras Railway Station, also known as London St Pancras and formally known as St Pancras International since 2007, is a central London train terminus on Euston Road in Camden’s London Borough. It is the terminus from London to Belgium, France and the Netherlands. St for Eurostar services. In 1868 Pancras International opened. Since then, it has undergone various renovations but retained its old charm. It is famous for its architecture in Victoria and is decorated with many works of art. The arched train shed at the station was then the largest single-span structure. Renaissance Hotel occupies its facade. Chhatrapati Shivaji Terminus, the only railway stations included in UNESCO’s list of world heritage sites, is an example of architectural triumph. Designed by Frederick William Stevens, it was opened in 1888 in a blend of traditional Mughal and Victorian Gothic architecture. It was formerly called Terminus Victoria. The station, named after Maratha King Shivaji, is one of India’s busiest stations used by approximately three million passengers a day.

The Grand Central Terminal is a commuter rail terminal in Midtown Manhattan , New York City, at 42nd Street and Park Avenue. Grand Central is the southern terminus of Harlem, Hudson, and New Haven Lines on the Metro-North Railway, serving the northern areas of the New York metropolitan area.

The Grand Central Terminal draws more than 20 million visitors a year, making it one of the top ten destinations for tourists. It is the world’s biggest train station with 44 platforms and 67 tracks. The new building was completed in 1913 and was constructed in Beau-Arts style. Formerly, it used to host a museum and art galleries. The railway station finds regular place in top lists. Many films have featured it, including The Godfather and Men in Black.