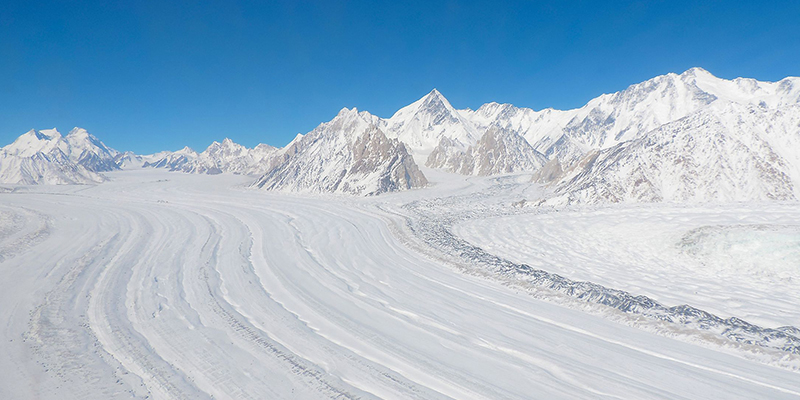 The Gangotri Glacier is located in Uttarkashi District, Uttarakhand, India, near the Tibetan border. With an estimated volume of about 27 cubic kilometres, this glacier, one of the Ganges’ principal sources, is one of the biggest in the Himalayas. The glacier stretches for roughly 30 kilometres and is 2 to 4 kilometres broad. The Biafo Glacier is a 67-kilometer-long glacier in the Karakoram mountain range of Gilgit-Baltistan, Pakistan, that joins the 49-kilometer-long Hispar Glacier at an elevation of 5,128 metres at Hispar La to form the world’s longest glacial system outside of the polar regions. It connects the ancient mountain kingdoms of Baltistan and Nagar by way of a roadway. It is the third biggest glacier outside of the polar regions and provides a breathtaking vista. Mingyong Glacier is located in Yunnan Province, People’s Republic of China. In four years, the glacier had receded 200 metres. A rising tree line has also been seen in the area, which is thought to be linked to global warming. The indigenous Tibetans regard the glacier as sacred. The Mingyong Glacier is located in Yunnan, China, and is one of the Tibetan glaciers melting at a rate of 7% per year. It has retreated 200 metres in four years and is displaying an increase in tree line, possibly due to global warming. It is the lowest of all Chinese glaciers, at an elevation of 2700m, and is fed by Mount Meili’s snows. The Pasterze Glacier is found in Carinthia’s Hohe Tauern mountain range, beneath the pyramid-shaped Grossglockner, Austria’s highest peak. With a length of 8.4 kilometres, the Pasterze is Austria’s and the Eastern Alps’ longest glacier. Outside of polar climates, it is one of the most astounding glaziers, having shrunk in volume by half since its initial measurement in 1851. The Fox Glacier and the Franz Josef Glacier are located in New Zealand’s South Island’s Westland Tai Poutini National Park. The Fox Glacier is 13 kilometres long, while the Franz Josef Glacier is 12 kilometres long. Together, the two glaciers, which are 20 kilometres apart, have the unique feature of descending from the Southern Alps to a temperate rainforest rich in greenery and lushness at a height of less than 300 metres. The Jostedalsbreen Glacier in the Sogn og Fjordane region of Western Norway is Europe’s biggest glacier. It is one of the world’s longest glaciers outside of the polar regions, with a length of 60 kilometres. It has significant melting rates in the snouts, which are maintained by heavy snowfall rather than temperature. There are around 50 glacier arms. The magnificent Jostedalsbreen has branches that stretch down into valleys.

In Tanzania’s African Great Lakes area, the Furtwängler Glacier is located near the peak of Mount Kilimanjaro. The transitory glacier, which has existed since before 1650, is a minor remnant of an ice cap that previously covered the mountain’s peak, 85 percent of which vanished between 1912 and 2011, and researchers predict that “no ice body will remain beyond 2060.” The Siachen Glacier is located along the Line of Control between India and Pakistan in the Karakoram Range of the Himalayas. With a length of 76 kilometres, it is the world’s longest non-polar glacier. The Third Pole is named by the considerable ice of the watershed along which the glacier is located. The Siachen Glacier is claimed by both India and Pakistan. The Fedchenko Glacier, one of the world’s largest, is located in the Pamir Mountains of Tajikistan, a mountainous nation in Central Asia. It is a small glacier with a maximum thickness of 1000 metres, yet it stretches for 77 kilometres, making it the longest glacier outside of the polar regions. Together, the Fedchenko and its hundreds of tributary glaciers constitute an incredible glacial river system.