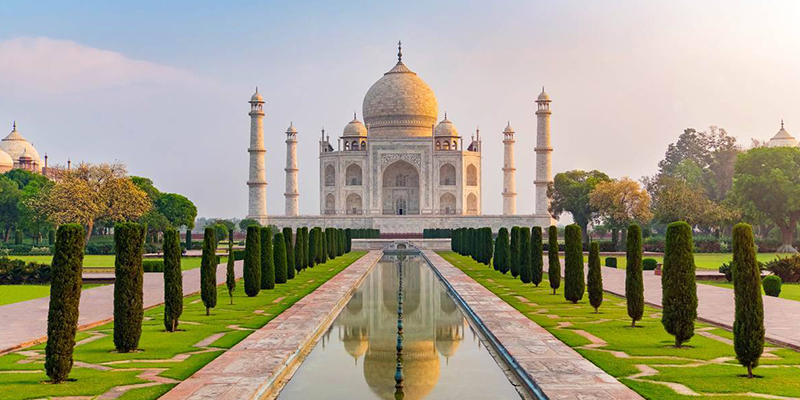 10 Taj Mahal was a Shiv Temple?

The Taj Mahal was created using a combination of Indian, Persian, and Islamic architectural traditions and is considered the pinnacle of the Mughal era’s architectural achievements. P. N. Oak, an Indian writer, later claimed that the Taj Mahal was originally a Shiv Temple and a Rajput palace, Tejo Mahalaya, erected by a Hindu monarch Parmar Dev and captured by Shah Jahan. The High Court denied his plea in 2000 to proclaim the same and dig the location for proof.

One of the most widely held beliefs about the Taj Mahal is that Emperor Shah Jahan ordered the workers’ thumbs amputated to prevent them from building a duplicate of his masterpiece. This, however, is not the case. Another common legend is that he planned to construct a black Taj Mahal but was unable to do so after being ousted. The concept is based on the fantastical writings of European adventurer Jean-Baptiste Tavernier, although there is no evidence to back it up.

8 Attack on the Taj Mahal The 1857 revolt took a toll on the Taj, which was largely destroyed. The troops had also damaged the garden by chiselling away some of the stones and lapis lazuli. Lord Curzon, the previous Viceroy of British India, ordered its refurbishment towards the close of the nineteenth century, which was finished in 1908. The garden that we see now was built to replace the Charbagh’s missing features. He also gave the Taj Mahal a chandelier, which now hangs there.

7 Changing Moods of the Taj Mahal Did you know that the Taj Mahal changes colour depending on the time of day? The Taj’s colour changes are aided by the white marble and reflecting tiles. It has a timid pinkish tint in the morning, which changes to a dazzling white as the day progresses, and then to a burnished golden at night under the moonlight. On full moon evenings, the Taj Mahal is especially beautiful.

6 The Perfection that Taj Mahal Is The Taj Mahal is one of the most symmetrical constructions in the world. It has four exactly similar sides, which are constructed utilising the concepts of self-replication and symmetry in geometry and construction to create a mirrored picture on either side. The two graves within, however, are uneven in size in order to maintain the male burial larger than the female tomb. The four minarets were erected somewhat outside of the plinth, so that if they toppled, they would hit the ground outside rather than the main building. The Taj Mahal, as Mumtaz Mahal’s commitment and tribute, includes calligraphy all over the interior and exterior, including calligraphy on the tomb that identifies and honours Mumtaz Mahal, among other patterns and holy inscriptions. Another noteworthy fact is that there are 99 calligraphic inscriptions of Allah’s names on the sides of the real tomb. After all, Shah Jahan envisioned Mumtaz’s dream house, and Taj Mahal was the realisation of that vision. Red stone walls surround the majestic structure on three sides. The entire structure is made of white marble. Marbles of the highest quality were brought in from Rajasthan, Afghanistan, Tibet, and China for the Emperor. However, this was most likely insufficient for the Emperor. Over 28 different varieties of precious and semi-precious stones, including the stunning lapis lazuli, are said to have been inlaid into the marble. We now know where all of the funds went. Ahmed Lahauri was the mastermind behind everything. He employed about 20,000 workers, including labourers, stonecutters, painters, embroidery artists, calligraphers, and others, to construct the Taj. But how were the stones and materials needed for the mausoleum’s construction transported? Well, elephants were used to complete the work, and there were almost 1,000 of the beautiful beasts involved. The Taj Mahal’s construction began in 1632, a year after Empress Mumtaz’s death. The building was finished in 1653, indicating that it took roughly 22 years to produce this magnificent piece of architecture. The anticipated building cost at the time was Rs. 32 million, which would be well over $1 billion in today’s money. The Taj Mahal was erected by Mughal Emperor Shah Jahan in remembrance of his third wife, Mumtaz Mahal, whom he adored. Mumtaz Mahal was giving birth to the emperor’s fourteenth child and died in the process. This occurred in 1631. According to legend, Shah Jahan, who regarded his empress as a vital part of his existence, was devastated following her death, and his hair and beard turned snow white in just a few months, such was the devastating impact of her death on him.