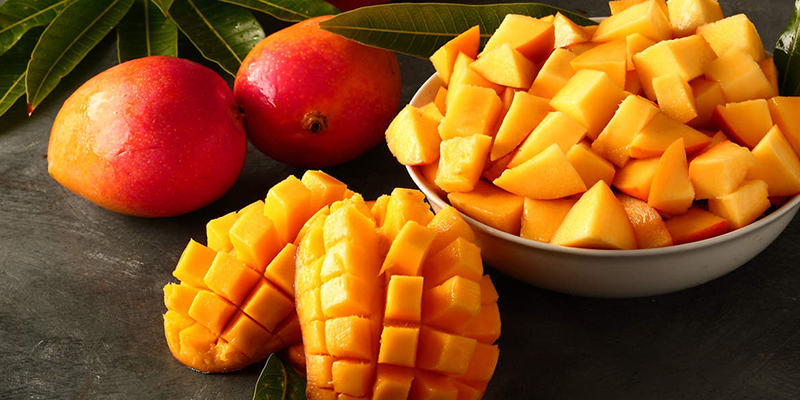 Mangoes are said to have originated some 5000 years ago in the hills of northeastern India. It spread from there to the Middle East, East Africa, and South America, owing to its huge seed, which people could easily carry around 300 or 400 AD. Spanish explorers brought mangoes to South America and Mexico in the 1600s. The mango was initially introduced to the United States in Florida in 1833. Mangoes may be grown in the United States in Florida, California, Hawaii, and Puerto Rico. For the past 30 years, about 4000 acres of land have been economically farmed in Puerto Rico, although the majority of it is transported to Europe.

The king of fruits is revered in several faiths, particularly Hinduism. Mangoes are so important in Hinduism that they are referenced throughout their holy scriptures, including the Ramayana, Mahabharata, and Puranas. The fruit’s leaf is used to adorn the entryway of houses or structures so that good fortune might enter in and fend off evil in many religious festivals and celebrations. Purnakumbha is a water-filled clay pot containing fresh mango leaves and a coconut that is used in puja. Water is the emblem of life-giver, and the pot is the symbol of Mother Earth. On the day of Basant Panchami, mango flowers are utilised to honour Goddess Saraswati. Aside from that, the mango tree’s wood is utilised in religious rituals such as puja and haven. Because wood is considered sacred, it is often utilised at funerals. The mango tree is highly revered in Buddhism. Lord Buddha is said to have pondered among the beautiful green orchards of mango trees.

Are you aware that the mango is the national fruit of three countries? Yes, this delightful fruit is India’s, Pakistan’s, and the Philippines’ national fruit. These nations also have the sweetest mangoes. The Philippines is home to the carabao mango, which was named the sweetest in the world by the Guinness Book of World Records in 1995. In 2010, Bangladesh declared the mango tree to be the country’s national tree.

Mangoes have been used for therapeutic purposes since ancient times. It’s been utilised in traditional cures for a long time. In some manner, the bark, pit, leaves, and pulp are all useful. Mangoes include phytonutrients called carotenoids and polyphenols, which aid in the prevention of illnesses such as hypertension and inflammation. Constipation, piles, arthritis, indigestion, and dysentery can all be prevented with it. Mango peels can also be used in folk medicines provided the peep and latex that are spread on its surface are well cleansed before consumption, as latex and peep can cause dermatitis.

India is easily referred to as the world’s mango capital, since it is the world’s top mango producer, followed by China, Thailand, and Indonesia. The interesting truth is that India exports less than 1% of its mangoes to other countries. This is due to the fact that it consumes the majority of its mangoes.

Because of its high vitamin, mineral, and antioxidant content, mango provides a number of health advantages. Mangoes include vitamin C, which aids in the formation of blood vessels and collagen, both of which aid in the healing process. It also aids in the absorption of iron. Vitamin K aids in the prevention of blood clots and anaemia. It can also help to reduce cancer risk since it is high in antioxidants, which combat free radicals that can harm your cells and cause cancer. It is beneficial to the digestive system since it contains both Amylase chemicals and dietary fibre, among other things. Amylase chemicals aid digestion by breaking down complex carbohydrates in the stomach, whereas fibre relieves constipation. Mangoes contain vitamin A, which is beneficial to vision and skin health. Folate is necessary for cell division and DNA replication.

This super-delicious fruit is so popular that it has its own day. Although every day is mango day for mango lovers, the 22nd of July is designated as National Mango Day in India. To commemorate this day, you may consume a variety of mangoes and prepare a variety of cuisines, beverages, and smoothies. Since 1987, the Mango Festival in Delhi has been hosted on the 22nd of July every year. Throughout 50 different mango producers from all over the country are represented. There are competitions and quizzes about mangoes, covering their applications in various cuisines and the several types available.

Mango crazes have been around for a long time. Poets have utilised the moon, stars, and flowers, and mango has been given the same honour. Mirza Asad Ullah Ghalib, a well-known Urdu poet, was a huge fan of mangoes, as evidenced by several instances. Another poet who loved mangoes was Rabindranath Tagore, who wrote poetry on mango blooms called Aamer manjori. Poems on mangoes have also been composed by another poet, Saad Bin Aard.

The mango form is supposed to have influenced the paisley design, which originated in India. They were designed to represent love and eternity, which is why they resemble the shape of a mango. Mango designs and paisleys can be seen on Kashmiri shawls, Kanchipuram silk sarees, and other Indian embroidery styles. Because of its pre-Islamic Zoroastrian background, paisleys are also popular in Iranian art. When the East India Company arrived in India, they brought it to Europe, where they stayed popular for over a century until fading away.