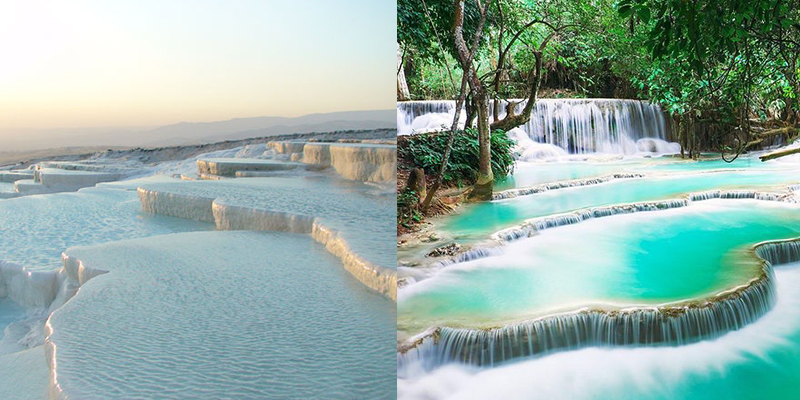 Alternatively known as the Tat Kuang Si Waterfalls, the Kuang Si Falls or Kuang Xi Falls is a three-tiered waterfall about 29 kilometers south of Luang Prabang. The waterfalls in Luang Prabang are a favorite side trip for tourists and start at a steep hillside in shallow pools. Kuang Si falls are a series of beautiful falls and pools, located in Laos city of Luang Prabang. The most beautiful tourist attraction in the Luang Prabang is possibly this. In reality Kunag Si falls are surrounded by lush tropical forest. So you can enjoy the pleasant mild weather apart from the breathtaking view of the falls. In the jungle there are trails which lead you to the falls. The Grotta della poesia is a beautiful calcareous pool situated on Italy’s Adriatic coast. This natural pool is also called Poetry Cave. It is said to have been used to bathe a beautiful princess in this natural tub. The locals started to believe this habit is the secret behind her beauty. This natural pool measuring 600 square meters is excavated by years of constant sea activity. The pool of the grotto della poesia is circular in pattern. It also has to have windows, one at sea and one at ground. It is a big swimming hole in the village of Lotofaga in Samoa. This trench to the ocean is 30 meters deep. A ladder for the access to the pool is built on this site. This natural pool ‘s water is very transparent and has a brilliant blue hue. Tourists can swim easily in this pool, because it’s not so deep. At the top of this pool are huts for relaxing, cooking, and drinking. There is a sinkhole called Dudu in the town of Cabrera on the northeastern coast of the Dominican Republic. Its cool, crystal clear water is very popular among international tourists. Dudu lagoon water is much warmer and smoother than the beaches. This amazing natural swimming pool is 100 ft deep. Entry to the pool is by a small staircase. Besides this facility, pendulum style ropes can be found there as well. You can use these ropes to swing and drop into the lagoon’s cool water for a fun-filled experience. The Hinatuan Enchanted River, also known as the Hinatuan Sacred River, is a deep spring river in the Philippine island of Mindanao. At Barangay Talisay, Hinatuan, Surigao del Sur it flows into the Philippine Sea and the Pacific Ocean. It is located between the Talisay and Cambatong Barangays boundaries. The Enchanted River, as the name suggests, is a stunningly colorful river situated in Philippines’ Mindanao Island. The origin of this beautiful river is not known to anyone. That is why it is so called the enchanted river. The enchanting river seems like a magical location for first time travelers. Because river color is amazingly beautiful. This amazing natural pool is located within a protected area of 232 acres, in Texas State’s Austin City. The pool of Hamilton has striking green water and is surrounded by large slabs of limestone. There are also small drops of waterfall from the roof of the limestone. Hamilton pool was created over thousands of years ago, when the dome of an underwater river collapsed with constant natural erosion. Thankfully the special natural pool is never filled up. This is really Austin City’s marvel. It is a great natural thermal pool in southwestern Turkey, located in the province of Denizli. It contains a group of Travertines and Hot Springs. Since the 2nd century B.C the globally popular Pamukkale was used as a thermal spa. Pamukkale ‘s distinctive castle like shape was created over the years by the hot springs continuously depositing minerals. This 1.7 mile long natural site includes a total of 17 hot springs. The Victoria Falls is one of the largest waterfalls in the world, with a water flow rate of 500 million liters per minute and a distance of nearly 1 mile. It also has Niagara Falls twice its height. What about going swimming on the bottom of such a massive waterfall? Fortunately, on the Zambia side, there’s a natural rock pool at the bottom of the Victoria Falls called ‘Devil’s pit.’ You can easily swim in the Devil’s pool during the dry season, when the water level decreases. That is Victoria Falls at the edge of 108 meters high.

Ik Kil is a cenote in the municipality of Tinúm, south of Pisté, Yucatán, Mexico. It is situated in the Yucatán Peninsula ‘s northern center and is part of the Ik Kil Archeological Park near Chichen Itza. It is open to the public for the whole year to swim from 9 am to 5 pm. It’s an amazingly rounded, bathing hole of crystal-clear blue water. The Ik Kil cenote is situated in Mexico’s Yucatan peninsula, within the Eco-Archaeological Reserve. In the Mayan civilization the Ik Kil cenote is of great importance. This cenote was used for the calming and ceremonial services centuries ago. Today it is one of the world’s most famous natural pools.