Top 10 Highest Waterfalls in The World 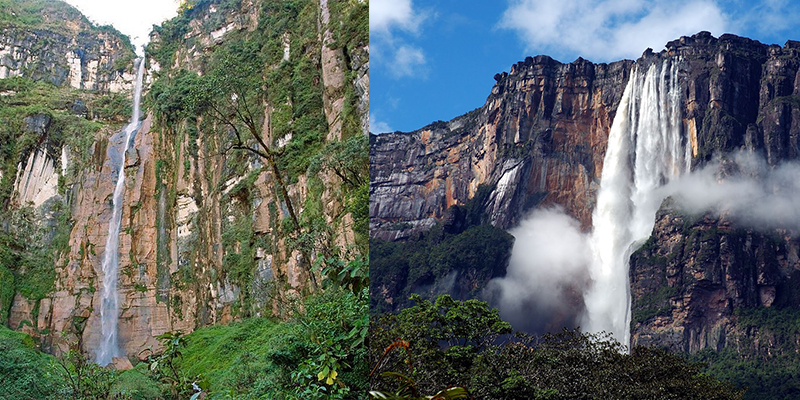 Top 10 Highest Waterfalls in The World

Browne Falls is a waterfall above Doubtful Sound, in New Zealand’s Fiordland National Park. The waterfall falls down to the fiord near Hall Arm, in a temperate rain forest. The falls were given heights of 619 meters and 836 metres. Their source is a tarn named Lake Browne (836 m above sea level) that flows over the side of the mountain face when it is full. The stream makes a difference in height of 836 m over a horizontal distance of 1,130 m, thus the mean gradient of the stream is 42 degrees. James Bruce Falls is a waterfall in British Columbia, Canada, North America’s highest-measured waterfall and the world’s ninth-tallest. Located in the Princess Louisa Marine Provincial Park, it falls 840 meters down to Princess Louisa Inlet from a small snowfield and cascades. Pu’uka’oku Falls is Hawaii’s second highest waterfall in the United States, and the eighth highest in the world. It consists of several hops. The waterfall reaches 2,756 feet (840 m) high in total. Vinnufossen or Vinnufallet is Europe’s highest waterfall, and the sixth-highest in the world. The tiered horsetail waterfall, 865 meters (2.838 ft) tall, is located just east of Sunndalsøra village in Sunndal municipality in Møre og Romsdal county, Norway. The falls are part of the Vinnu river that flows down from the Vinnufjellet and is drained from the Vinnufonna glacier. The falls flow into the Driva River, near Hoelsand village. Yumbilla Falls is the name of a waterfall near the town of Cuispes, in the northern Amazon region of Peru. It is considered the fifth highest waterfall in the world, and has been globally recognized since late 2007 due to a geological survey conducted by Peru’s Geological Institute. Falls are 2938 feet (896 m) tall. Olo Umupena Falls, or Oloupena Falls, is a waterfall located in the north-eastern part of Molokai Island in Hawaii, and is unofficially regarded as the fourth highest waterfall in the world, and the highest in the United States.

The falls occur when a small, seasonal stream spills over the edge of one of the world’s highest sea-side cliffs, between the Valleys of Pelekunu and Wailau. It cut a groove in the cliff-face and can only be viewed from the water or sea. Falls are 2.953 feet (900 m) high. Tres Hermanas Falls is officially the world’s third highest waterfall with a height of 914 meters (2.999 ft). It is situated within Otishi National Park, near the Cutivireni River Northern Fork, in the Junin region of Peru.

Tres Hermanas is a tiered waterfall, surrounded by montane trees, with three drops or parts. Officially, the cumulative total drop of its five separate free-leaping falls is 948 m (3110 ft). However, a Czech scientific expedition took new measurements in 2016, which made the falls 983 m tall. Confirmation of the data was submitted to the World Waterfall Server. The source of the Tugela River (Zulu for ‘sudden’) is the plateau of Mont-Aux-Sources, stretching several kilometers beyond the escarpment of the Amphitheatre, from which the falls fell. It is the highest uninterrupted waterfall in the world, with a height of 979 meters (3,212 ft) and a dip of 807 m (2,648 ft). The waterfall falls over the edge of the Auyán-tepui Mountain in Canaima National Park (Spanish: Parque Nacional Canaima), a UNESCO World Heritage site located in Bolívar State’s Gran Sabana region. The height number, 979 m (3,212 ft), consists mainly of the main dive but also includes about 400 meters (1,300 ft) of sloped cascade and rapids below the drop and a 30-meter (98 ft) high dip downstream of the talus rapids.