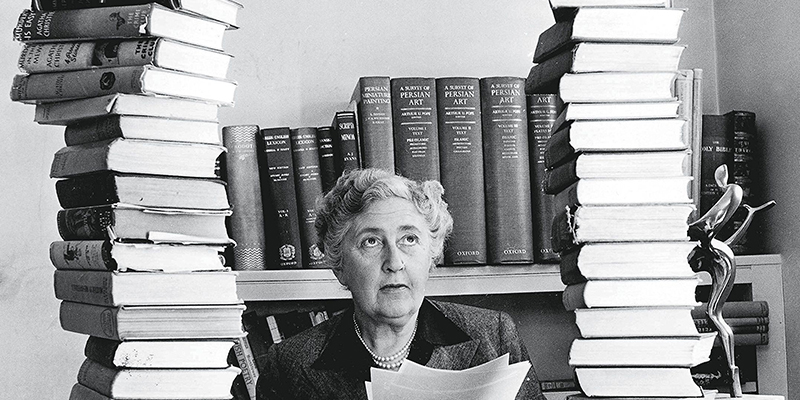 Ellery Queen is a pseudonym shared by Daniel Nathan and Emanuel Benjamin Lepofsky. They created stories about a mystery writer and a young investigator named Ellery Queen. The character of Queen assists his father, a New York City police inspector, in solving the most difficult murder cases. The Ellery Queen is a classic whodunit mystery in which the reader receives the same clues as the lead investigator. American detective fiction authors Frederic Dannay and Manfred Bennington Lee invented the pseudonym Ellery Queen in 1929. Phyllis Dorothy James, Baroness James of Holland Park, OBE, FRSA, FRSL, was an English author and life peer known professionally as P. D. James. Her series of investigative books featuring Adam Dalgliesh, the police commander and poet, catapulted her to popularity. Phyllis Dorothy James is a writer from England. Adam Dalgliesh, a police captain and poet, is one of her most well-known inventions. Her mystery books were adapted for television in the 1980s by the ITV network in the United Kingdom, starring Roy Marsden as Adam Dalgliesh. They were later shown on the PBS network in the United States. Her second mystery novel, The Children of Men, was made into a blockbuster film starring Julianne Moore in 2006. Jim Grant is a pseudonym for Lee Child, an American novelist. He was named president of the Mystery Writers of America in 2009. In 1997, his debut novel, Killing Floor, won him the Anthony Award for Best First Novel. Child’s most famous character is Jack Reacher, a former American military police officer who goes around solving murders. Child’s writing style has been regarded as commercial and hard-boiled. Patricia Highsmith was a mystery and psychological thriller author from the United States. The Talented Mr. Ripley, which was made into a film in 1999, was her most popular suspense novel. Several of her stories have been adapted for the big screen, with Alfred Hitchcock being the most famous. Strangers on a Train, her debut novel, was turned into a film by Alfred Hitchcock in 1951. Raymond Thornton Chandler was an American/British author. Chandler began writing books at the age of 44, after losing his job at an oil business. The Big Sleep, his debut novel, was released in 1939. He’s published a number of short tales as well as seven books. His work has had a profound impact on American literature. Chandler became the president of the Mystery Writers of America in 1958. Sir Arthur Ignatius Conan Doyle is best known for creating Sherlock Holmes, the world’s most famous fictional investigator. Doyle was a prolific mystery writer in addition to being a crime writer. His debut work, The Mystery of Cloomber, was released in late 1888. Doyle was a prolific writer who produced poetry, fantasy, science fiction, dramas, and historical fiction, which many critics regard as his greatest work. Despite the fact that the public loves Sherlock Holmes stories, Doyle was sick of writing them. As a result, he increased the price to the point where publishers would be unable to demand additional Holmes stories from him.

Edgar Allen Poe is recognised for his dark and eerie stories. Poe is credited with establishing the detective fiction genre and retains a key place in American literature. Poe’s work covered cosmology and cryptography. His work has since been featured in films, music, television, theatres, and other works of literature. Every year, the Mystery Writers of America honours Poe by presenting the Edgar Award to outstanding works in the mystery genre. Poe is recognised as one of the authors who began to perceive writing as a professional choice, resulting in a financially precarious existence. In the 1860s, an English writer named William Wilkie Collins rose to renown and financial security. Around this period, he wrote The Woman in White, Armadale, No Name, and The Moonstone, among his best works. His work was dubbed “sensation books” by contemporary critics. In 1851, Collins met Charles Dickens and the two became fast friends. Many of his early works were published in Dickens’ magazines All the Year Round and Household Words after being rejected elsewhere. Dorothy Leigh Sayers was an English author who penned detective fiction during the Golden Age of the genre. Lord Peter Wimsey, an amateur detective and English aristocrat, appears in Sayers’ most popular mystery books and short tales. Wimsey was a combination between Bertie Wooster and Fred Astaire, according to Sayers. Sayers has built Lord Peter into a complex figure over the course of eleven books and two collections of short tales. Montague Egg and Harriet Vane, in addition to Lord Peter, are two of her recurrent characters. The Mousetrap, written by Agatha Christie, is the world’s longest-running mystery play. After some difficulties, her debut novel, The Mysterious Affairs of Styles portraying Hercule Piorot, was released in 1939. It was an instant bestseller, and it aided in the birth of her career. Christie’s works rank third in the world’s most extensively distributed literature, behind Shakespeare’s plays and the Bible, with two billion copies sold. She is now the world’s most translated novelist. And There Was None, her best-known mystery novel, has sold over 100 million copies worldwide.