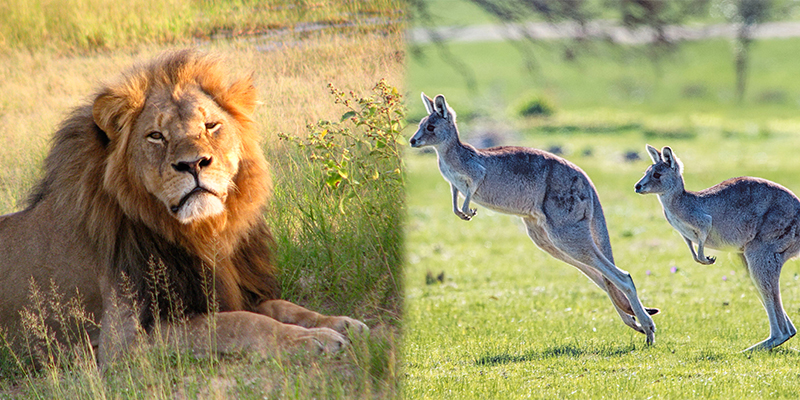 Kangaroos are the only large animals to use hopping as a locomotive. The average hopping speed for a red kangaroo is around 20–25 km / h (12–16 mph), but speeds of up to 70 km / h (43 mph) can be reached over short distances, whereas 40 km / h (25 mph) can be sustained for almost 2 km. The strong gastrocnemius muscles raise the body off the ground during a hop while the smaller plantaris muscle, which attaches close to the broad fourth toe, is used for push-off. In the elastic tendons, 70 per cent of potential energy is retained. It employs pentapedal locomotion at slow speeds, using its tail to form a tripod with its two forelimbs while pulling forward its hind feet. African wild dog is a Sub-Saharan African feral canine. It is the largest indigenous canine in Africa and the only remaining member of the genus Lycaon, which is characterized by highly specialized dentition for a hypercarnivorous diet and a lack of dewclaws from Canis.

African wild dogs are among the world’s most endangered species. This highly social animal lives in large packs of as many as 40 members. Wild African dogs are opportunistic hunters often attacking antelopes and gazelles. While the pace of the chase gives them a major advantage. The wild dogs can run at speeds of up to 44 mph. Hares and jackrabbits are leporids which belong to the Lepus genus. The hares are known as rabbits within the same family. They are similar in size and shape to rabbits and have similar herbivorous diets but typically have longer ears and live in pairs or solitary.

Jackrabbit is just a hare larger than a rabbit. A hare also has longer ears than a rabbit, and longer hind legs. These strong long hind legs make them excellent at both leap and race. A jackrabbit can cover 3 meters away in a single leap. They can also reach a maximum speed of 45 mph as a predator chases them. Besides this incredible speed, jackrabbits even run in zigzag fashion to avoid the predators. Greyhound is the World’s fastest breed of dogs. This slim build dog can be 46 mph at a pace. It is one of the oldest breeds of dogs, and was bred for competition. Weights 22 and 38 kg full grown male greyhound. It’s the slim body of the build, and strong , sturdy legs for the greyhound to reach such an extraordinary level. The lion is a animal of the Felidae family; it is a deep-seated, muscular cat with a short, rounded head, reduced neck and round ears, and a hairy tuft at the end of its tail. It is sexually dimorphic; adult male lions have the most identifiable characteristic of the genus, a prominent mane.

A lion pride can comprise between 15 and 40 leaders. In the community they often hunt which increases the rate of success. A lion can reach a maximum speed of 50 mph during chase. But only for a short distance, they can keep the pace. The only known member of the antelope genus is Blackbuck. They live in the grasslands of the Indian subcontinent and open woodlands. Male blackbucks have long, attractive horns with spirals. The main blackbuck predators are wolves, cheetahs, and jackals. As you might expect, speed is the primary tool these mammals use for not being prey to. They can run at a top speed of around 50 mph. The blue wildebeest is mostly involved in the morning and late afternoon, spending the hottest hours of the day in rest. These highly agile and careful animals are able to run at speeds of up to 80 km / h (50 mph), wave their tails and turn their heads. An analysis of the blue wildebeest activity at the Serengeti National Park found that the animals devoted more than half of their total time to rest, 33% to feeding, 12% to moving about (mostly walking), and a little to social interactions. There were, however, differences among different age groups and sex groups. Springbok is an attractive antelope of median size. ‘Pronking’ on Springboks is the most attractive thing. Those antelopes’ unusual behavior includes several jumps into the air. These leaps range in height up to 2 metres. Springboks also rate among the world’s fastest land animals. Might run at a speed of 55 mph when the predators are near these fast animals. The pronghorn is the only living member of the family Antilocapridae and has been in North America for more than a million years! The pronghorn has a body resembling a deer. It weighs between 90 and 120 pounds, and stands from shoulder to foot about 31/2 feet tall. Of reddish brown body it has a tan. Cheetah the world’s fastest terrestrial mammal. The mighty hunter reaches a staggering pace of 75 mph during a pursuit. Built for speed is their long slender body, small head, and long but strong legs. What is more shocking is the speed at which a cheetah accelerates. It can hit between 0 and 60 mph in just 3 seconds.