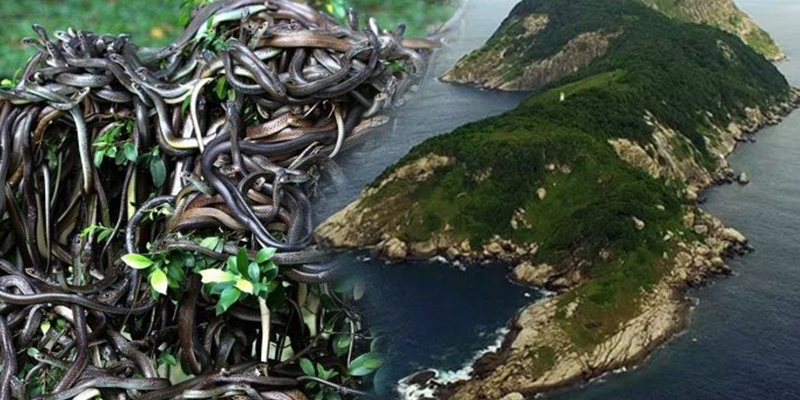 It is a tiny island in northern Italy, between Venice and Lido. The island’s history is pretty somber. The island has historically black pits where Plague’s victims had been buried after being quarantined here. More than 100,000 people have died here, by a rough calculation. The island also became a shelter in 1922 for mentally ill patients where a doctor reportedly experimented with crude lobotomies. He later committed suicide by jumping down from a tower saying the ghosts had made him insane. The island is now mostly deserted as the unexplained occurrences and eerie noises lead many people to avoid going there.

Situated in the Pacific Ocean, this island is a member of the Marshall Islands. His entire population was evacuated to the neighboring island in 1946 because the United States had to perform its nuclear tests over there. Twenty-three nuclear tests were bombarded, including a hydrogen bomb, until 1958. Though half a century has passed, there is still pollution of the food grown over here.

Miyake-Jima is a small island in Japan where the latest eruptions of an active volcano Mount Oyama lasted from 2000 to 2004. This is quite a lot of time now! The volcano has still left behind toxic sulfur vapors and an alarm goes off when they reach a specific level, warning the residents to wear gas masks. Another island called Izu still faces the same circumstances but here the inhabitants must wear the gas masks 24/7 or else they die of complications due to extreme pollution.

Ilha da Queimada Grande, also known as Snake Island, is an island in the Atlantic Ocean off the coast of Brazil. It is governed as part of Itanhaém municipality in São Paulo state. Limited in size, the island is just 43 hectares and has a temperate climate.

It is also known as the Island of the Snake. The island is home to the venomous golden lancehead pit viper, which is critically endangered. The snakes became stuck on the island because the rising sea levels filled the ground that links the island to the mainland. It helped them adapt to the climate and their population grew exponentially, there are now thousands of them. What a happy ending for those species at risk! The venom from this snake will melt human tissues and meat and cause hemorrhage of the brain, kidney failure and instant death. Brazilian navy barred this island from the public. Ramree Island is an island off the coast of Myanmar’s Rakhine state. Ramree Island is the largest Rakhine Coast and Myanmar island in the entire country. The island area is approximately 1,350 square kilometres, and Ramree is the main populated center. In the Ramree Island area up and into the 1960s, saltwater crocodiles were still common but the area no longer supports a viable crocodile population, presumably due to hide-hunting, and evidence indicated that only scattered individuals remained by the early 1980s.

The Enewetak Atoll is a large coral atoll of 40 islands in the Pacific Ocean and forms a legislative district of the Marshall Islands’ Ralik Chain with its 664 inhabitants. For a total land area of less than 5.85 square kilometers (2.26 sq mi), it is no higher than 5 meters and covers an 80 kilometers (50 mi) deep central lagoon. It is the Ralik Chain ‘s second-westmost atoll, 305 kilometers (190 mi ) west of the Bikini Atoll.

It was controlled by the Japanese from 1914 until its capture by the United States in February 1944, during the Second World War. During the Cold War, nuclear testing by the United States containing more than 30 megatons of TNT took place; in 1977–1980, a concrete dome (the Runit Dome) was constructed on Runit Island to store radioactive soil and waste. Since the 17th century, the island has been inhabited. The island is extremely stunning, and an draw for visitors. The question is that there are large numbers of sharks in the water around it! Seventeen shark attacks of which seven were fatal were reported during 2011 and 2015. In 2013, more than half of the coast featured a ban on swimming, surfing and bodyboarding. The Reunion prefect also announced 45 bull sharks and 45 tiger sharks would be taken out of the waters. Located in Gruinard Bay, about halfway between Gairloch and Ullapool, Gruinard Island is a small, oval-shaped Scottish island about 2 kilometers (1.2 mi ) long by 1 kilometer (0.6 mi) wide. It lies about 1 kilometer (0.6 mi) offshore at its nearest point to the mainland. Following experiments with the anthrax bacterium in 1942, the island became dangerous to all mammals, until it was decontaminated in the late 20th century.

The island was kept under wraps due to the British government’s biological experiments in warfare. The scientists worked with the Anthrax bacterium that destroyed all of the island’s animal species and poisoned the soil. Decontaminating it for public visits was considered costly but was finally disinfected by the 20th century.

North Sentinel Island is one of the Andaman Islands, a Bay of Bengal archipelago that also includes South Sentinel Island. It is the birthplace of the Sentinelese, an indigenous people in voluntary exile who have resisted all contact with the outside world, sometimes violently.

Nominally, the island belongs to the Administrative District of South Andaman, part of the Andaman and Nicobar Islands Indian Union Territory. In practice, Indian authorities understand the desire of the islanders to be left alone and restrict their position to remote surveillance; they do not prosecute them for killing people. The island is currently a protected Indian sovereign territory. In 2018 , the Government of India, in a significant move to improve tourism, removed 29 islands – including North Sentinel – from the Restricted Area Permit (RAP) system until 31 December 2022.

The Sentinelese people live on the island ‘s north and reject any contact with the outside world. We are the last people that the new world remains unchanged. And, they tend to be left alone in their own little universe. They welcome the tourists with spears and arrows and it has been stated that no outsider comes out alive. In 2006 the natives killed two Indian fishermen when their boat mistakenly drifted too close to the island. The Island of Vozrozhdeniya was an island in the Aral Sea. The area of the former Island is split between Uzbekistan and Kazakhstan. In 1954 the Soviet Union established there and on the nearby Komsomolskiy Island a biological weapons research site called Aralsk-7, which also no longer exists.

In 1948, there was established a top secret Soviet laboratory experimenting with bioweapons while studying various agents such as smallpox, anthrax, plague, brucellosis, and tularemia. In 1971, armed smallpox was accidentally released from the laboratory which infected ten people and eventually killed three. When one of the Soviet’s own defectors violated the security in the 1990s, the inhabitants of the island were evacuated, and the base was entirely abandoned until 1991. It turned into a ghost town.