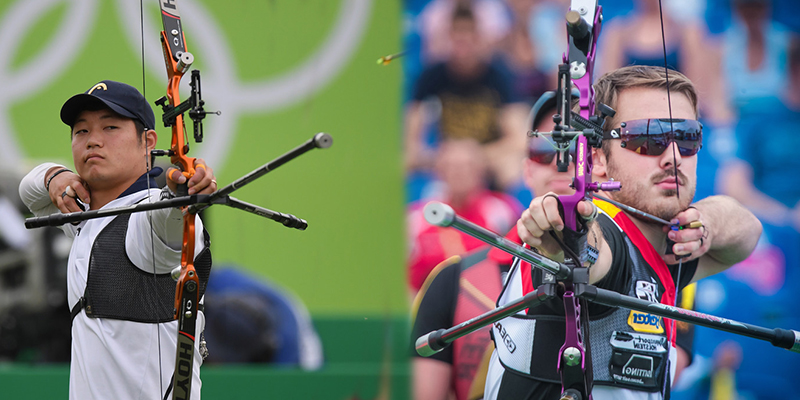 Crispin Duenas is a Canadian recurve archer who represented Canada at the 2008 Beijing Olympics and the 2012 London Summer Olympics.

He is one of the top male archers in Canada with a good career both as a cadet and junior international. He is a major in physics at University of Toronto.

Duenas ended his ranking round at the 2008 Beijing Summer Olympics, with a total of 664 points. This gave him the 16th seed for the final bracket of the competition where he was facing Magnus Petersson in the first round. In the regular match, both scored 108 points, and they had to go into an extra round. Duenas scored 18 points in this extra round while Petersson advanced with 19 points into the second round. Hideki Kikuchi, is an archer from Japan. He competed for his country at the 2012 Summer Olympics in the men’s team event winning 6th place in Team competition and 66th place in Individual competition. He is an Archer from Brazil who was born on 30 January 1998. He won a silver medal as an athlete at the 2013 World Archery Cup, held in Lausanne. His success in the youth category includes a silver medal in the 2014 World Youth Champions held at Nanjing as an individual cadet.

He started competing internationally in 2013, and he won 3 gold medals at the South American Games the very next year, smashing all South American records in 1440 rounds. His steep ascent to the sport’s top levels as a teenager won him Archery’s Neymar nickname. Having previously participated in various Asian tournaments, he made his international debut at the 2014 Archery World Cup. At the 2015 World Archery Championships in Copenhagen, Denmark, Ku competed in the individual recurve event, team recurve event, and recurve mixed team event, where he took home gold medals in the team recurve event and recurve mixed team event. At the 2016 Summer Olympics in Rio de Janeiro, Brazil, Ku represented South Korea on the men’s archery team event and the men’s individual archery event. In the team event, Ku and the team from South Korea won the gold medal. In the gold medal match against the United States, Ku shot six consecutive perfect tens across three sets. Brady ‘The Cowboy of Arizona’ Ellison is an American archer specializing in recurve archery. He is currently a resident athlete at the Olympic Training Center in Chula Vista, California, the United States. He holds the record as the world number-one ranked men’s recurve archer for the longest continuous period, from August 2011 to April 2013. During the 2015 world championships, he received his nickname “The Prospector” because of his ability to ‘dig gold.’

Ellison finished his ranking round at the 2008 Beijing Summer Olympics with a total of 664 points which gave him the fifteenth seed for the final competition bracket in which he faced John Burnes in the first round. Ellison won the 111–89 contest, and advanced to the second round. He could not defeat another Canadian, Jay Lyon, here, who was too good with 113–107. Pierre Plihon, a French competitor in recurve archery, is participating.

Plihon first competed internationally in 2014, in which year he won a team gold medal at the 2014 Echmiadzin European Archery Championships and qualified for the 2014 Lausanne World Cup Final, winning a silver medal at the first stage in Shanghai. He has represented France at the 2016 Rio de Janeiro Summer Olympics. Florian Kahllund, who competes in recurve archery, is a German athlete. Kahllund played internationally for the first time in 2013 and won the individual title at the European Championships in Echmiadzin in 2014 and qualified for the World Cup Final, winning the third stage of the Antalya single competition. Utah Rick was the runner-up with a Silver medal at World Junior Championship in Ogden in 2009. He won Silver with the Mixed Team at the WJC in Legnica, Poland in 2011, Bronze with the Team and Individually he got 4th. In May 2012 Van der Ven became European Outdoor Champion at the Olympic Stadium in Amsterdam, both individually and with the Dutch team. Van der Ven also became European Indoor Champion in Rzeszow in February 2013, again both individually as well as with the Dutch team. Oh Jin-Hyek, is an archer from South Korea. Oh first played for the Korean national team in 1999 but did not win a major individual international competition until he captured the gold medal at the 2012 Summer Olympics in the Men’s individual event, thus being the first Korean male archer to earn an Olympic Gold medal. He also finished in third place in the Men’s team event with partners I m Dong-Hyun and Kim Bub-Min. From April 2013 until June 2014, he was the world’s number one archer, winning the individual gold medal at the 2013 Archery World Cup Final and two individual silver medals at the 2011 and 2013 World Championships. Lee Seung-Yun, is an archer from South Korea. He was first selected for the South Korean archery team in 2013 after winning medals at the World Youth Championships, in which year he won team and individual medals at the 2013 Archery World Cup, finished 4th in the World Cup Final in Paris, and reached the final of the 2013 World Archery Championships where he defeated teammate and Olympic champion Oh Jin-Hyek. In 2013, he achieved a career-high world ranking of 5, and ranked 8th in 2016.

Lee, he never finished out of the top eight in competition in his first foreign season. As well as his world title, he qualified at the 4th World Cup stage of the year in Wroclaw for the World Cup Final courtesy of an individual gold medal.