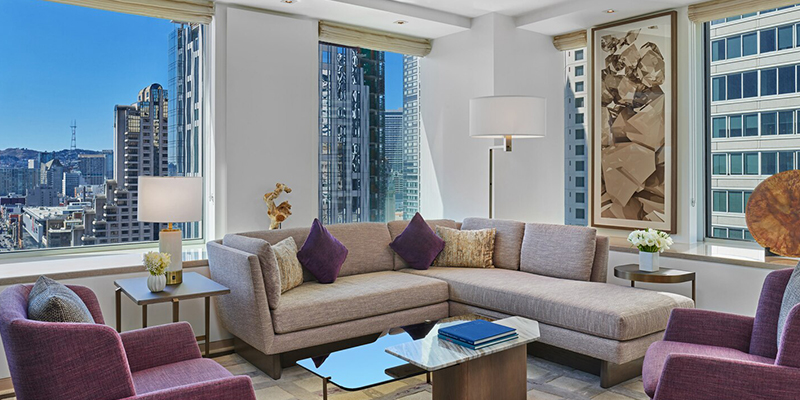 W San Francisco embodies the city’s distinct vitality, placing visitors in the heart of it all, only steps from downtown must-sees including the San Francisco Museum of Modern Art and Chinatown. Hotel suites include panoramic views of downtown San Francisco and modern conveniences such as Davines bath products, pillowtop mattresses, and well-stocked minibars. Fit, the hotel’s fitness centre, will get your pulse pounding, while Trace, the W’s farm-to-table restaurant, will replenish you at any time. Visit the Living Room Bar in the evening, where the downtown set drinks specialty cocktails. The hotel is on the pulse of what’s new, now, and next in San Francisco as the frequent host of fashionable events. The InterContinental San Francisco is located at the junction of Howard and Fifth streets in San Francisco’s South of Market Area (SOMA), close to the Moscone West Convention Center and steps from Union Square. The 32-story high-rise, made of translucent glass, achieves a delicate balance between work and pleasure. The 550 rooms of this contemporary hotel have cutting-edge technology and floor-to-ceiling windows in all accommodations (rooms on floors 25 and above). For the tenth year in a row, the hotel’s main restaurant, Luce, a Tuscany meets California wine-restaurant, has been awarded a Michelin star. A full-service spa, a fitness club, and a large outdoor patio are among the hotel’s amenities. At Palace Hotel, a Luxury Collection Hotel, experience the opulence of the Gilded Age. This historic hotel in San Francisco’s downtown district, only steps from Union Square, cable cars, and Chinatown, has historical characteristics combined with classically inspired, modern design. Its famous Garden Court recently received a makeover, with modern furnishings and a bold colour scheme that complement the abundance of marble and crystal chandeliers. The hotel has 556 rooms with new floors, rich woods, layered fabrics, and huge tufted headboards, all while maintaining the original 1909 features. The Golden Gate Bridge and the Bay are perfectly framed by the Four Seasons Hotel San Francisco at Embarcadero. The premium hotel is located on the top 11 floors of a 48-story building that towers over the city’s many hills. With its headquarters firmly planted in the heart of the city, it takes just seconds to move from heavenly heights to the neighbourhoods where the city works, innovates, and pleasures itself. In 155 beautifully equipped rooms and suites, guests are treated to the pinnacle of modern luxury, with custom furniture and carefully selected textures. Later this year, the hotel will open a brand-new street-level restaurant that will highlight California’s abundant vegetables. The Taj Campton Place on Union Square is the archetypal boutique hotel, located near the Financial District, art galleries, museums, and the city’s most well-known businesses. For both business and leisure tourists, the European ambience and personalised service provide an elegant and pleasant stay. The hotel has 110 rooms, as well as 24-hour room service, complimentary house-car service, a complimentary PressReader hotspot, complimentary morning coffee, tea, and pastries in the lobby, in-house laundry and dry cleaning, in-room safes, in-room espresso makers, and complimentary turn-down service with bottled water. The world-class Fairmont San Francisco is positioned atop Nob Hill in the city’s centre, just a short cable car ride from the busy Downtown, Financial District, Union Square, and Fisherman’s Wharf. It’s the only place in San Francisco where all of the city’s cable car lines come together. This City by the Bay landmark features 606 guest rooms and suites with modern furniture and renovated décor, rejuvenating the already beautiful, traditional but contemporary lodgings. The Tonga Room & Hurricane Bar, which specialises in family-style dinners and Polynesian-fusion dishes, is one of the hotel’s two dining locations. The sibling hotel of the Four Seasons Hotel San Francisco at Embarcadero, the Four Seasons Hotel San Francisco is located two blocks from Union Square and the Museum of Modern Art, in the heart of everything San Francisco has to offer. There are 277 welcoming rooms and suites here, all with floor-to-ceiling windows with stunning views of the Financial District and Yerba Buena Gardens. Nespresso machines and free L’Occitane products are among the room amenities. Guests may remain in shape at the Equinox Sports Club, which has an indoor lap pool. MKT Restaurant – Bar attracts gourmets seeking handmade drinks and small dishes. The Ritz-Carlton San Francisco is one of the city’s finest hotels in one of the country’s most popular cities. The property is within walking distance of Union Square shopping, the Ferry Building, and the Financial District, and is housed in a 1909 Nob Hill landmark. Italian marble bathrooms with double basins, separate water closets, luxury amenities, and soft terry towels are included in each of the 336 guest rooms, which just received a $7 million USD makeover. Parallel 37, the hotel’s signature restaurant, serves internationally acclaimed cuisine. A full-service spa is also available, with rejuvenating facials, body treatments, and massage therapies. This Forbes 5-star hotel in the SoMa District provides customised service, high-end facilities, and stylish rooms. Moscone Center, Oracle Park, SFMOMA, and Yerba Buena Center for the Arts are all within walking distance of the hotel. Each of the 260 elegant rooms and suites features luxurious mattresses, spacious bathrooms with soaking tubs and rainforest showers, huge workstations, and Wi-Fi, as well as vistas of downtown San Francisco. Exclusively serviced by St. Regis Butlers, the luxurious suites feature spacious layouts with separate living rooms and hardwood floors. Guests may sample San Francisco delicacies at the Grill restaurant, and relax in the lounge with the property’s trademark afternoon tea. Cavallo Point, a former US Army station near the Golden Gate Bridge, provides one of the most sought-after accommodations on the West Coast, just minutes from San Francisco. The façade of the lodge has been lovingly renovated, maintaining the historic design of Fort Baker. Many of the hotel’s 142 classic and contemporary rooms have panoramic views of San Francisco Bay, the city skyline, and the bridge. The lodge’s Murray Circle restaurant serves Northern Californian cuisine, and an intimate cooking school offers a constantly changing class schedule. Relax with a variety of massages, facials, healing arts therapies, and more at the spa.