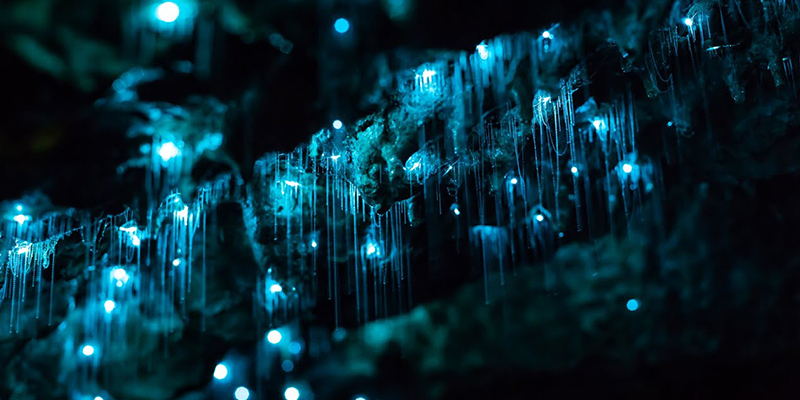 The firefly squid, also known as the dazzling enope squid or hotaru-ika in Japan, belongs to the Enoploteuthidae family of squids. Watasenia is a monotypic genus with only one species. Firefly squids are seen every year off the coast of Japan, putting on a spectacular light show. It employs photophores, which are light-producing organs that generate a deep-blue light that may be flashed on and off in unison or in a variety of patterns. These predators use light to attract food, attract mates, and deceive predators about their form. Scorpions can be found in abundance. Simply walk out into the desert late at night and turn on an ultraviolet (UV) light. Scorpions flash a brilliant blue-green under the light, illuminating the night like beacons. They transform their entire bodies into light collectors, amplifying the weak impulses. When exposed to specific wavelengths of ultra-violet light, they shine. Under ‘black light,’ as well as if there is enough moonlight, they emit a brilliant blue-green fluorescence. Though the true purpose or use of this luminescence is unknown. However, experts are beginning to suspect that this is the case since scorpions dislike bright lights, including UV lamps. Sapphirina, often known as sea sapphire, is a parasitic crustacean or copepod. This tiny, translucent organism may be found in the oceans all around the world. These creatures don’t have a light about them; instead, they glitter. The reason for this is that the epidermal cells contain iridescent crystal plates that catch light and reflect it back. Arachnocampa is a genus of nine fungus gnat species with a bioluminescent larval stage similar to glowworm beetles’ larval stage. Arachnocampa species are found only in Australia and New Zealand, and they live in caves, grottos, and sheltered areas of woods. The caverns are inhabited by these worms, one of the most renowned being the Waitomo, which produce a luminous canopy as they adhere to the cave ceilings or walls, or form glow worm threads. Many animals live in symbiosis with these bacteria and exploit their bioluminescence in exchange for refuge and sustenance in their bodies. The bacteria residing in the barb-like escae of the Angler fish, for example, illuminate to give forth bioluminescence. Bacteria may be found in the tiny organs behind the eyes of flashlight fish, whereas bacteria can be found in the mantles of Hawaiian Bobtail Squids.

The clusterwink snail is the only snail that flickers its shells like tiny light bulbs, whereas glowing snails display bioluminescence in the form of faint flashes in the head-foot area. As a kind of self-defense, the spiral shells produce a blue-green glow in flashes. The light that is created by a single mushy area on the snail’s body is amplified and diffused by the shell.

The cookiecutter shark, commonly known as the cigar shark, is a tiny squaliform shark that belongs to the Dalatiidae family. This shark may be found in warm, oceanic seas all throughout the world, especially around islands, and has been seen as deep as 3.7 kilometres. The cookie cutter shark, which barely makes it to the top of the water, eats by cutting off cookie-sized portions of meat from its prey’s body parts. Its dark brown body has a thick ventral layer of cells that emit a chilly light. The combination of this light and the low light pouring from the sky distorts the familiar form of the shark in the sea. A bioluminescent protein utilised in the biotechnology sector makes Aequorea jellies shine. A chemical reaction within a living creature produces bioluminescence, which is light. When luciferin interacts with oxygen, it produces a glowing effect. Light is released as a result of the discharge of energy. This magnificent species can create the most stunning underwater scene by emitting a light from its normally translucent body thanks to fluorescent protein, photo-protein, and other bioluminescent proteins. The Lampyridae family of insects belongs to the Coleoptera order of beetles, and there are over 2,000 species known. They are soft-bodied beetles that are known as fireflies, glowworms, or lightning bugs because they employ bioluminescence to lure mates or prey at night. They are also known as lightning bugs because they have unique light-emitting organs beneath their abdomen. To attract mates, they generate light in various colours, like as yellow, green, or pale red, and emit it in blinking patterns. Its unappealing flavour is also reflected in the light.