Best place to visit in delhi 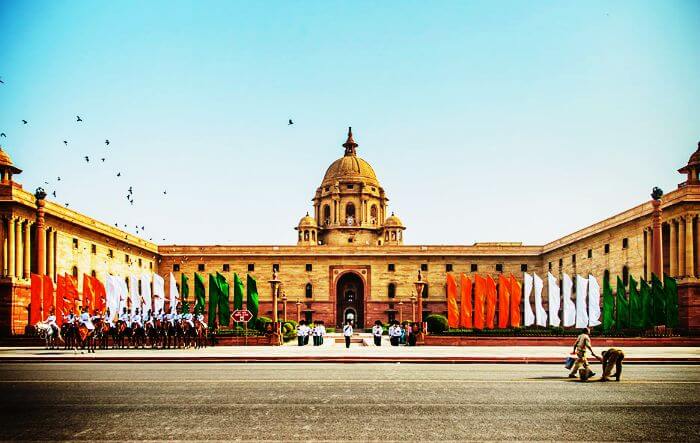 So a close buddy is visiting Delhi for the first time and you are excited yet confused about showing him the tourist places in Delhi. Not your fault. The long list of tourist attractions in Delhi often gives nightmares to most established trip planners.
Chill! All you have to do is figure out what they like, and choose from our list of famous tourist places in Delhi across different categories. From monuments & temples to parks & museums, Delhi has so much in store that it won’t stop amusing you. Don’t believe us? Get packed and leave right away to be mesmerozed by the beautiful city!

Delhi’s most famous monument, the Red Fort, stands not only as a powerful reminder of the Mughal era India but also a symbol of India’s struggle for freedom. It was build by fifth Mughal emperor Shah Jahan, when he decided to shift his capital there from Agra in 1638. The fort’s turbulent history includes being captured by the Sikhs and the British. To take your imagination back to the ancient era, a one hour sound and light show of the fort’s history is held each evening.

Standing at 73 metres high, the Qutub Minar is the highest tower in India, located at the famous Qutub in Delhi. The tower was built using a combination of Irani and Afghani architectural styles.

Along the sides of the tower, you can see inscriptions of scripture text and a few carvings. Just next to the Qutub Minar is the Quwwat-us-Islam Mosque – the first ever mosque built in India.

Safdarjung’s Tomb is situated inside the Lodhi Estate. The tomb was built in 1754 by Safdarjung’s son, Shuja-ud-Daula, as a mausoleum for his late father.

Highlights of the Safdarjung’s Tomb are the Moti Mahal, Badshah Pasand and Jangli Mahal, which are small canopies, and the gorgeous white marble dome that sits on top of the mausoleum. There is a lovely garden that borders the tomb and a few pathways where one can enjoy walks.

Located in the heart of the city, the India Gate monument was built by Edward Lutyens in honour of all the Indian and British soldiers who died during World War I.

Just next to the India Gate, there is another memorial called the Amar Jawan Jyoti that was built to honour Indian soldiers of the 1971 Indo-Pak war.

The Purana Qila is an old fort that was constructed by Sher Shah Suri, a former Afghan king. The fort is famous for having symmetric, double-storied doors, made entirely of red sandstone.

Another noteworthy sight at Purana Qila is the colourful marble and beautiful stones that adorn the main gate of the fort. There are the many pavilions and gorgeous balconies that add to the grandeur of the fort.
Location: Mathura Road
Entry Fee: Rs. 5 (Indians), Rs. 100 (foreigners)
Timing: 5.30 am to 7 pm

Built nine years after his death, the tomb of Humayun is a magnificent monument that stands in Delhi. A true example of exquisite design, Humayun’s Tomb is worth visiting for its fine Mughal architecture.
The best time to visit Humayun’s tomb is during the afternoon, that’s when you can click fantastic pictures of the place.

Located close to Humayun’s Tomb, Isa Khan’s Tomb was constructed during the reign of the Sufi Dynasty.
The tomb is adorned with polished marble and ornate door coverings. The best things to see at Isa Khan’s Tomb are the gorgeous big verandahs and the gorgeous lattice windows.

The Jama Masjid has the distinction of being the largest mosque in India. The mosque took six years to complete and was also the last magnificent monument to be built by Shah Jahan. The eye-catching red and white minarets, the large dome, and high rise arches near the entrance of the prayer hall of the Jama Masjid are very typical of Mughal architecture.
Location: Chandni Chowk
Entry Fee: Rs. 200 (for cameras and video cameras)
Timing: 8 am onwards

The Signature Bridge is a cantilever spar cable-stayed bridge which spans the Yamuna river at Wazirabad section, connecting Wazirabad to East Delhi.

What are the best hotels in India?