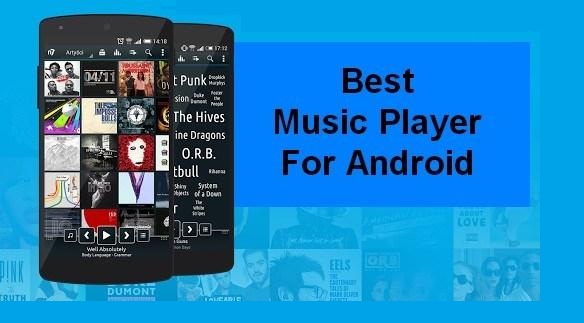 most devices nowadays come with Google Play Music as the default music player. It is simple and does the job, but lacks features like folder view in the library, the ability to edit tags for files and many other necessary tools.

Whether you are a musicophile or a casual listener, this list of best Android music players will surely enhance your listening experience.

AIMP is a fairly powerful mobile music app. It supports most common music file types, including mainstays like FLAC, MP3, MP4, and others. You also get a host of customization options, theming, and other fun stuff like that. The app has a simple UI and we had no problems getting around and listening to music. It keeps it simple with a decent Material Design interface. We also appreciated its outstanding equalizer, HTTP live streaming, and volume normalization. It’s definitely a step up from most basic music player apps. There is also a desktop version in case you want to kill two birds with a single app.

JetAudio comes in both free and premium versions, but you get so much in the free version that most users won’t even need the latter. The only downside is that the free version is supported by ads, but they aren’t intrusive, so they’re tolerable.

Here’s what you get: a 10-band equalizer with 32 presets, lossy and lossless support, effects like reverb and x-bass, playback speed control, automatic gain control, and more.

JetAudio Plus costs $4 and comes with a 20-band equalizer, built-in tag editor, over a dozen widgets, and a few other convenience features.

PowerAmp has been the go-to music app for many Android users over the years. With over 50 million downloads, it’s certainly one you should consider if you’re looking for a great music player for your phone. It’s not free, but you can try it for two weeks before deciding whether to pay for the Pro version.

Rocket Player has been around for a few years now, and it has come a long way since its inception. A lot of the bugs have been fixed, it performs much smoother now, and the feature set has expanded by a lot.

For free, you get a 10-band equalizer with several presets, over 30 themes, a built-in tag editor, Chromecast support, a sleep timer, a nifty playlist manager, and even support for podcasts.

Shuttle is another beautiful music player that offers a material design UI along with plenty of options. You get pretty much all the standard features that’s expected of any music player including playlist support, a sleep timer, gapless playback, and many theme options (including light and dark mode).

Black Player is a solid choice for music lovers due to its impressive feature set, although most of it is only available on the premium version, Black Player Ex.

Still, you get an ad-free interface that’s easy on the eyes and is packed with useful features such as crossfading, embedded lyrics support, equalizer with bassboost and 3D surround virtualizer, scrobbling and more. It also supports all the standard music file formats such as mp3, wav and ogg. You can’t go wrong with this one.

If you’ve come this far down the list and aren’t satified with the “lightweight” options further up, then we recommend giving Pixel Player a try. It’s lesser known, as evidenced by its number of reviews, but it’s pretty darn good.

It only supports basic file formats, but it has a 5-band equalizer with bass boost, gapless playback, a built-in tag editor, and a few options for customization, such as themes and colors. Most notably, Pixel Player can analyze what you listen to and suggest more music that matches your tastes.