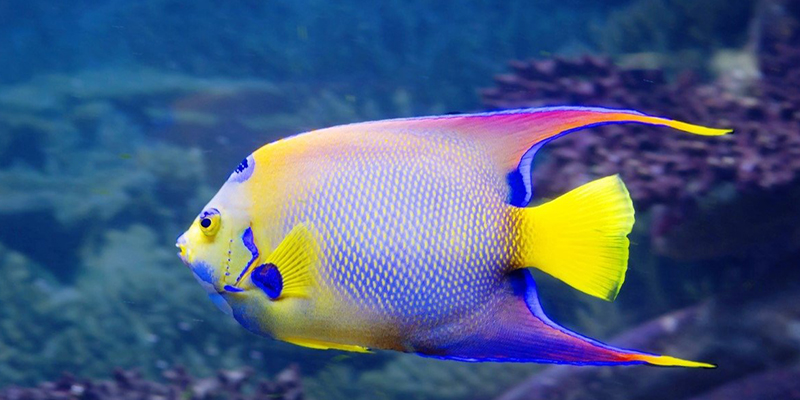 The neon tetra is a freshwater fish belonging to the Characiformes order and belonging to the Characin family. It is native to blackwater and clearwater streams in the Amazon basin of South America, where it is the type species of its genus. One of the most popular freshwater species is neon tetras. They’re small, thin, and easy to take care of. Neon Tetras do not grow very long, only reaching a length of about 2.2 cm. They are naturally placid and serene, and do best in groups and tanks with plants, rocks, and other hiding places. Poecilia sphenops is a species of fish in the genus Poecilia that goes by the popular name molly. It is also known as short-finned molly or common molly to distinguish it from its congeners. They live in Mexico’s freshwater streams, as well as coastal brackish and marine waters. They reach a length of 3-4 inches and are pretty lovely. Mollies are omnivores, meaning they eat both other animals and plants. The fact that these fish are livebearers makes them extremely appealing. Their eggs develop inside their bodies and hatch into living fry. The guppy, also known as millionfish or rainbow fish, is a popular freshwater aquarium fish and one of the world’s most extensively distributed tropical fish. It belongs to the Poeciliidae family and, like practically all American members of the family, bears live young. They aren’t picky, however if the genders aren’t separated, they can breed with each other quickly. Guppies come in a variety of hues, and males appear to be more appealing than females. These fish have vibrant personalities and can adapt to a wide range of environmental conditions. The goldfish is a freshwater fish belonging to the Cyprinidae family of the Cypriniformes order. It is one of the most popular aquarium fish and is widely kept as a pet in indoor tanks. In some places of North America, goldfish released into the wild have become an invasive nuisance. They can reach lengths of about 14 inches in the wild and 5 inches in aquariums, and they have a very appealing appearance. Some goldfish have been reported to live up to 25 years. If you want to keep these fish, you’ll need at least a 20-gallon tank. However, because they are low maintenance, there is no need to be concerned. The betta, also known as the Siamese fighting fish, is a freshwater fish endemic to Southeast Asia, specifically Cambodia, Laos, Myanmar, Malaysia, Indonesia, Thailand, and Vietnam. They come in a variety of hues and are generally laid-back. When housed with other species, particularly males, Betta fishes are aggressive and territorial by nature. It’s best to maintain only Bettas in your aquarium, yet if they’re peaceful, you can mix them in with other fish. The gold barb or the goldfinned barb are two species that can be confused with this one. The golden barb, sometimes known as the golden dwarf barb, is a cyprinid fish native to Asia’s interior waters. It may be found in Pakistan, India, and Bangladesh. Colombian seas have also been exposed to it. They can reach a length of about 1.5 inches and are easily identified by their golden body with black markings. Golden Dwarf Barbs thrive in planted aquariums. One thing to keep in mind is that you should not have more than 5 of these fish in your aquarium.

Pterophyllum is a tiny genus of freshwater fish belonging to the Cichlidae family that is commonly referred to as angelfish by aquarists. The Amazon Basin, Orinoco Basin, and different rivers in the Guiana Shield in tropical South America are home to all Pterophyllum species. They’re stunning, and they come in a variety of designs and hues. Other species, such as shrimps and insects, as well as plants, can be eaten by angelfish. It’s ideal if they’re kept away from any little fish. In fact, you should not keep too many fish with them because they are territorial and violent. Freshwater fish in the genus Xiphophorus that lack a “sword” at the bottom of their tails are known as platy. Both species are livebearers, like the guppy and molly, and belong to the Poeciliidae family of fish. Platies are native to Central America’s east coast and southern Mexico. They are generally gentle fish that may survive in a variety of environments. Platies, Mollies, and Guppies are all easy to keep together. It’s also not difficult to feed them. You can feed them a variety of proteins as well as plant-based items. The zebrafish is a freshwater fish that belongs to the Cypriniformes order and belongs to the minnow family. It is a popular aquarium fish native to South Asia, sometimes sold under the trade name zebra danio. They’re low-maintenance, petite, and only reach a height of 5 to 7 cm. They must be kept in groups because they are schooling fish, or they will become anxious. Insects, crabs, and worms are favourites of this tiny fish. You may even feed them regular flake fish food. One thing to keep in mind is that Zebra Danios can easily leap out of your tanks, so keep them covered at all times. Marcus Pfister is the author and illustrator of The Rainbow Fish, a children’s picture book that has been translated into English by J. Alison James. The Rainbow Fish has striking glossy foil scales, and the book is best known for its lesson about selfishness and giving. Rainbow fishes appear in a variety of brilliant hues, but you won’t notice them until they reach adulthood. These fish are shy and normally get along well with other fish, such as Tetras and Barbs. As a result, you should have no trouble fitting them into your first communal aquarium.